.
Eternal Rest Grant Unto Him, O Lord,
and let perpetual light shine upon him;
may his soul, and all the souls of the faithful departed,
through the mercy of God,
Rest in Peace. Amen. 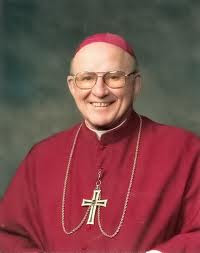 William H. Bullock, bishop emeritus of Madison, Wis., whose service to the Roman Catholic Church began with parishes in Minneapolis and Edina, then as an educator at St. Thomas Academy, has died.

Bullock, 83, died Sunday of lung cancer at a pastoral center in Madison.

Bullock's 51 years of active service to the church culminated with his mandatory retirement in 2003 after 10 years as bishop of the Madison Diocese. Previously, he was bishop of the Des Moines Diocese for six years.

At the time of his 80th birthday, Bullock told the newspaper of the Madison Diocese: "The next big thing I will do in my life is die, and I want to do that well."

Among Bullock's defining moments in Madison were the creation of an office of Hispanic ministry and authorizing construction of a Catholic Multicultural Center, which provided social services for new immigrants and the poor. He also created a diocesan sexual abuse review board, made up mostly of laypeople.

"He wanted to make sure we were doing what the Lord calls us to do, which is greeting a stranger and making a guest feel welcome," Monsignor Daniel Ganshert, who served as Bullock's assistant, told the Wisconsin State Journal.

Bullock was born in 1927 on a family farm near Maple Lake, Minn., and he turned to his rural upbringing as an icebreaker during a one-on-meeting with Pope John Paul II.

Bullock recalled saying to the pontiff, " 'Holy Father, I am quite nervous here today -- I am a simple farm boy from Minnesota and here I am in the presence of the successor of St. Peter.'

"At that moment, the Holy Father took my hand and said, 'And I am a simple peasant pope from Poland, but God wanted to use us both.' With those kind words, I was then at ease in our visit."

Bullock graduated from Annandale High School during World War II and attended what is now the University of St. Thomas in St. Paul before serving in the Navy during the war.

After the war, he graduated from the University of Notre Dame with a degree in philosophy, then entered St. Paul Seminary. His post-graduate studies took him back to St. Thomas and Notre Dame.

He entered education, teaching religion at St. Thomas Academy in Mendota Heights starting in 1957 and was its headmaster from 1967 until 1971.

In 1980, Bullock became an auxiliary bishop for the Twin Cities archdiocese, then was appointed bishop in Des Moines seven years later.

A citation accompanying an honorary degree in 2005 from the University of St. Thomas noted of Bullock: "Your life as a priest and as a leader of hundreds of thousands of Catholics in the Upper Midwest has served both as an inspiration and a lesson for us all."

In June 2006, Bullock had an audience at the Vatican and was thrilled by the "enormous privilege to be able to shake hands with Pope Benedict XVI," noting that they were born three days apart.

Bullock described Benedict as "a man of great clarity and precision in his teaching and consistent in the clarity with which he preaches."

Bullock is survived by two sisters, Adelaide "Addie" and Elizabeth "Betty" Bullock. A public funeral mass open to the public will be celebrated at 11 a.m. Thursday in Madison at Our Lady Queen of Peace Catholic Church, 401 S. Owen Dr. Interment will be in Resurrection Catholic Cemetery, Madison. In lieu of flowers, memorials are suggested to the Catholic Multicultural Center through Our Lady Queen of Peace. Star Tribune

Bishop Bullock was born on April 13, 1927, in Maple Lake, Minnesota. After serving in the United States Navy during World War II he completed seminary studies and was ordained a priest for the then-Archdiocese of Saint Paul in 1952. Father Bullock undertook three parochial assignments before being named an instructor and then headmaster at St. Thomas Academy, St. Paul. Concurrent with his duties at St. Thomas, Father Bullock completed an M.A. in Liturgy and Religious Education at The University of Notre Dame and an ED.S. at St. Thomas University. From 1971-1980 he served as Pastor of St. John the Baptist Parish in Excelsior, MN and in 1980 was named Auxiliary Bishop of Saint Paul and Minneapolis. On February 10, 1987 Bishop Bullock was named by Pope John Paul II Bishop of Des Moines and on April 13, 1993 was named the third Bishop of Madison. Serving past the age of retirement, Bishop Bullock began his service as an active Bishop Emeritus on May 23, 2003.

As shepherd of the Diocese of Madison for ten years, Bishop Bullock outlined his priorities early on: encouraging increased spirituality among the priests and laity of the diocese, evaluating ways to efficiently use buildings, programs and agencies, and to build a vision for the Diocese together. Bishop Bullock, at his installation in 2003, stressed the importance of Christian love in this vision, saying: “First, loving and trusting God and second, loving our neighbor generously and without resentment. If we continue to do that, nothing will be able to separate us from the love of Christ.”

During his years of leadership of, and service to, the Diocese, Bishop Bullock established the official archives of the diocese; established the thriving St. Thérèse of Lisieux Lecture Series, as an opportunity to experience that life giving presence of Catholic Tradition, to learn more about their faith and to live charity more authentically; led the Diocese of Madison in celebrating its 50th anniversary (1996), and gave the great work started by St. Martin House a real home through formally opening the Catholic Multicultural Center (2002). His vision at the CMC is continued through the generous leadership and work of Our Lady Queen of Peace Parish, in Madison.

Bishop Robert C. Morlino often said of Bishop Bullock in life, and repeats now in his passing, that “He was an ideal predecessor for me and I could not be more grateful for that. The impact of his labors here bears fruit to this day, and I’m thankful to have known and served with him. Please pray with me that he may be granted by the Almighty those gifts which served as his three-word Episcopal Motto: Grace, Mercy, Peace.”

In lieu of flowers, memorials to the Catholic Multicultural Center through Our Lady Queen of Peace Catholic Church would be appreciated. Eternal rest grant unto him O Lord, and let perpetual light shine upon him. May he rest in peace.