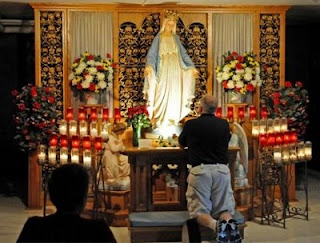 .
The Catholic Diocese of Green Bay expected the small shrine in Champion to generate interest after it was officially recognized as a site where the Virgin Mary had appeared -- the first and only such site in the United States.

Diocesan officials just weren't prepared for the intense response and flood of visitors to the Our Lady of Good Help shrine.

"The immediate aftermath was the phone was ringing off the hook," said Karen Tipps, a caretaker of the shrine in northeastern Brown County. "Right from Dec. 8 on, we never had a slow time this winter."

People began flocking from across the country in the middle of a harsh Wisconsin winter, coming from as far away as Texas, New Orleans and even the south Pacific island of Tahiti -- to pray and pay respects.

According to Catholic Online, the shrine is one of only 12 recognized sites around the world, joining the ranks of shrines in Lourdes, France; Guadalupe, Mexico; and Fatima, Portugal.

The website reports that following a two-year formal inquiry, Bishop David Rickin of the Green Bay diocese issued a decree with "moral certainty" that the events, apparition and locutions given to a young Belgian immigrant woman who claimed to have received three visits from the Virgin Mary at the Champion site in October of 1859.

Tipps estimates visits have grown tenfold, growing from an average 75 to 100 visitors a day to between 500 to 800, including daily bus tours. Similar in traffic, she said, to what used to be one of the busiest days of the year, the Catholic Feast of the Assumption on Aug. 15.

"It was kind of an eye-opener. It was like Aug. 15, every day for seven days straight," Tipps said. "Our whole classification of what normal is has changed."

The shrine will even be featured in a July 13 prime-time ABC "Nightline" documentary that examines the Virgin Mary as a religious icon and visits apparition sites around the world.

The sudden and dramatic intrigue has forced the diocese to play catch-up, adding staff, volunteers and amenities to the small but swamped chapel and beginning to plan for future growth and possible expansion to the site.

"The turnout has been incredible," said Ricken . "It's been a wonderful gift to the diocese. So many people are coming, and there are all kinds of reports of answered prayers and healings continuing."

Ricken admits the diocese wasn't prepared initially for the onslaught of visitors to the 5.5-acre site, but he's responded to what he called "a good problem" by adding two staff members to the chapel, recruiting two priests to serve in permanent posts, constructing additional restrooms that open this week and training a corps of about 100 volunteers.

"It's kind of overwhelming for the people we have now. —1/8 I didn't think it would take off this fast," Ricken said. "I think the biggest challenge is going to be keeping up with whatever the Blessed Mother does. However she chooses to use this place, we are going to be running to catch up most of the time. But what a pleasant problem to have."

Although 150 years old, the Our Lady of Good Help shrine had been relatively unknown outside of Northeastern Wisconsin before December.

Continued growth presents a separate challenge of maintaining the shrine's integrity and preventing overcommercialization while still serving the masses that make the pilgrimage.

"We don't want to become a kind of a circus or something, so we have to guard against that —1/8 we're going to do the best we can to make sure we preserve the beauty and simplicity of that shrine," Ricken said.

"On the other hand, we don't want to keep people away, because there are crowds coming."

The Rev. Tim O'Malley, pastor of St. Joseph Catholic Church in Round Lake, Ill., organized a group of about seven people to visit the shrine in Champion.

They didn't travel the furthest distance, but their trip may have taken the longest: They walked the 168-mile trek from the Chicago area to the shrine over six days.

Ricken credits the shrine for rejuvenating and refreshing the spirits of many believers. He hopes all who hear about the shrine come away recognizing God's love.

"God loves us, and he's almost desperate to communicate his love for us. And he does it through the Blessed Mother and through many other means," Ricken said.