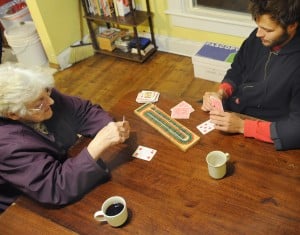 What is Catholic Worker?

The Catholic Worker movement was founded by Dorothy Day and Peter Maurin in 1933 among the poor of New York City. The movement is grounded in a firm belief in the God-given dignity of every person.

All they ask is your first name. Every day, the Winona Catholic Worker community breathes life into the words of the Gospel, offering home, help and a hot meal to whoever comes to the door. "Knock and it will be opened," the Gospel reads. No questions asked. "There are no forms to fill out," said Laurie Watson, a live-in community member at Bethany House. "We don't check IDs or ask questions, except ‘What is your first name?'"

Winona Catholic Workers have been opening doors to people in need since the Dan Corcoran House opened in 1992 at 802 W. Broadway. The house was named in honor of the Rev. Dan Corcoran, a chaplain at Winona State University's Catholic Newman Center who inspired a generation of students with his commitment to living the message of Jesus, according to Mary Farrell, one of the founding members of the Winona Catholic Worker community. The two-story house that had long been student housing offered shelter and hospitality to women and families in need of a place to stay. Four years later, when a house just down the block came up for sale, the community was able to open Bethany House, 832 W. Broadway, to offer hospitality to single men. It's the only non-referred emergency shelter in Winona County, Watson said, "and there's a real need."

The faces of need

That need has many faces, and speaks in a diversity of voices.

There's Bill, who on a recent evening spoke of how he spent the wee hours of Black Friday with the crowds in a Walmart parking lot. He wasn't there to shop. He was trying to catch a couple hours' sleep in his broken-down van before resuming his search for a job the next day.

There's Dan, who had hot chow and a bunk while on deployment in Iraq, but neither waiting for him when he came home.

There's Stacy, who needed a place to land while she got her financial and emotional feet back under her. Her stay at Dan Corcoran gave her the time she needed to find her niche in the larger community.

"People who come here are in crisis," said Molly Greening, live-in volunteer at Dan Corcoran. "They literally need to take time to breathe." "We need to meet them where they are. Help them feel secure. Feel at home." Greening speaks of providing a "ministry of presence" to the people who share the home. "Just being there," she said-to listen, to comfort, to play a game of cards or run an errand in an unfamiliar city-is as important as meeting physical needs for food, clothing and shelter.

Openness to the whole person and the recognition of every individual as a person of equal worth and value is at the heart of the Catholic Worker movement, Watson said. It's demonstrated as community members live in the same house, eat the same food, and for the most part have the same income as the guests living temporarily among them. Voluntary poverty puts workers on equal footing with guests, Watson said, allowing them to see the world from a perspective closer to those they serve.

In practice, voluntary poverty means the six live-in community members and their guests depend on donations and their own enterprise to meet daily needs.

Guests are asked to comply with two simple rules at Bethany, Watson said. No drug or alcohol use, and be in the house by 10 p.m. Dan Corcoran has a few additional rules intended to avert potential friction in a larger house. Guests are not asked to sign in and out, attend religious services or perform household chores. "You don't ask guests to clean your bathroom," said community member Mike Abdoo.

Both houses are paid for, Farrell said, largely through the generosity of the Winona community. Day-to-day needs are met through donations of food, both groceries and food left over from events or prepared by friends. Cash donations cover other expenses and donations of clothing, furniture and services help meet the needs of guests and community members.

Live-in community members purposefully limit work time outside the community to about 15 hours a week, to prevent commitments from interfering with providing hospitality and presence to guests, Watson said.

"There's a joke that Catholic Workers aren't Catholic and they don't work," said community member James Johnson-adding that there is an element of truth lurking in the sentiment. "To be present to someone you have to be here," Greening said. "It's really as simple as that."

Catholic with a small ‘c'

"These houses exist," he said, "because we live in a society that forces some people to be homeless." Winona Daily News