Bishop Samuel Aqula of Fargo to Become Next Archbishop of Denver

It was only a matter of time for Bishop Samuel Aquila to move to a larger diocese than Fargo. Many thought he would have become the Archbishop of St. Paul-Minneapolis when Archbishop Harry Flynn retired. But that wasn't to be.
Archbishop Aquila will have big shoes to fill when he moves to the Mile High city, those of Archbishop Charles Chaput, O.F.M.-Cap., himself a former Bishop of Rapid City, now the Archbishop of Philadelphia, most probably soon to be a Cardinal, making the Dakotas a wonderful incubator of Good Shepherds for the Catholic Church.

from Whispers in the Loggia by Rocco Palmo
(The report below was formally announced by the Vatican at Roman Noon on Tuesday, May 29th.) 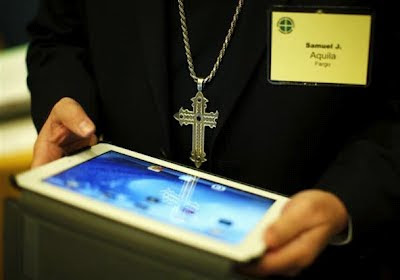 Much as the shop was planning to hold for Roman Noon, after a late leak to the Mile High City's ABC affiliate, we can proceed.

As noted below, the putative appointee -- born in California to a family that emigrated West from South Philly -- is slated to appear at the traditional 10am press conference before leading an evening Mass in the Cathedral-Basilica of the Immaculate Conception, located in the shadow of the Colorado Capitol. By virtue of his appointment alone, the archbishop-elect would be expected to receive the pallium from the Pope's hands in Rome a month from today on the feast of Saints Peter and Paul, alongside the world's other new metropolitans named over the last year.

According to credible reports, Aquila's installation has already been scheduled for Wednesday, July 18th -- 365 days since his predecessor-to-be, Archbishop Charles Chaput OFM Cap., was transferred to Philadelphia, in a move widely seen in church circles as the most challenging assignment an American prelate has been given in at least the last half-century.

A sacramental theologian trained at Rome's Benedictine-run Athaneum of Sant'Anselmo, as director of Denver's Liturgy Office, Aquila served as Master of Ceremonies at Chaput's installation as Colorado's fourth archbishop in April 1997. At the Capuchin's appointment, two years later Aquila took office as founding rector of St John Vianney -- the Denver seminary reconstituted from scratch which, within a decade of its establishment, has become the largest American formation house west of Mundelein. (Just last fall, the archdiocese received 20 first-year seminarians.) 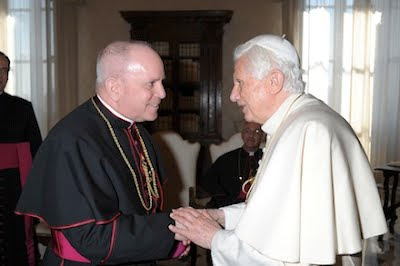 During his ad limina visit with the bishops of the upper Midwest in early March (above), Aquila was praised by the Pope for his push to restore the traditional order of the sacraments of initiation in the 90,000-member North Dakota church, where Confirmation has preceded First Communion since 2005.

* * *
The first and lone US city to host World Youth Day, in August 1993 -- an event termed the "second founding" of the Mile High church -- Denver is viewed by no shortage of key churchfolk both at home and abroad as the de facto seat of the New Evangelization on these shores, a distinction born from the encouragement given to and success experienced by creative apostolates ranging from the celebrated NewAdvent web portal and rapidly-growing college missionary effort FOCUS to the archdiocese's lay-led Augustine Institute and ENDOW, a mission to affirm and amplify the charisms of women in the church. Demographically speaking, meanwhile, a mass influx of Hispanic immigration coupled with the community's birth-rates over the last two decades has now given Latinos a slight but growing majority share of the archdiocese's Catholic population.

The Denver church stretches across some 40,000 square miles of Colorado's Northern third from the Mile High City to the state's Western Slope.

Notably, the last two Denver archbishops have subsequently been named to positions traditionally held by cardinals. While Chaput's Philadelphia predecessors have been given the red hat for the last century, Aquila's predecessor-to-be was returned to the Rockies (where Chaput had already spent a decade as a parish priest and Capuchin provincial) after the 1996 appointment of then-Archbishop J. Francis Stafford to Rome as president of the Pontifical Council for the Laity. Stafford's transfer ostensibly owed itself to the unexpected success of WYD Denver, which was felt in Rome to have "redefined" the concept and scope of the triennial event.

Elevated to the "Pope's Senate" in 1998, Stafford -- still a member of several Vatican offices, including the Congregation for Bishops -- is expected to retire in Denver on reaching his 80th birthday in late July, at which point his Curial memberships cease. Much as the Baltimore-born cardinal has maintained a vigor far younger than his years, the scholar-prince has reportedly kept his wish to be buried with the archdiocese's prior heads in the Bishops' Mausoleum at the local Mount Olivet Cemetery.

On 16 August, the Denver church marks the 125th anniversary of its founding as a diocese under the leadership of Joseph Projectus Machebeuf, the French-born cleric who would lay the groundwork for a sprawling, pioneering and evangelical Colorado Catholicism over the following three decades.

As ever, more to come.