.
The homosexuals are doing it again. They want us to think that they just want to be accepted. If you think that is true, please watch their parade this weekend and if you don't throw up, I'd be surprised. Who could accept those exhibitionists?

In addition, for some years they have had a prayer service at St Joan of Arc Parish in South Minneapolis. This year, Archdiocesan officials, who had been tipped off by someone who saw an announcement, informed the Joannies that "no mas", no more, will that prayer service extolling a lifestyle that is forbidden by the Commandments of the Church be held on Church property. St. Joan's itself immediately and cooperatively complied with the instructions of the Archdiocese.

Of course, "no" doesn't mean much to the folks at the Catholic Pastoral Committee on Sexual Minorities (CPCSM), an organization not affiliated with St. Joan's. Don't be confused by the word "Catholic" in the name of the CPCSM. The organization serves to promote the homosexual lifestyle and get itself welcomed within the Church. Of course, once they are within the Church, they will be working to convince the Church that to be truly "welcoming", it must abandon everything in it and regulated by it that has the slightest offensive aspect to it with respect to the depraved practices of homosexuals.

Their real purpose is to destroy the Church, retaining the pretty things that impose no rules, obligations or inconveniences upon homosexuals.

So this evening the CPCSM gathered outside of St. Joan's and had a sedate little march around the building to the rear, the entrance that is rarely used.. That side of the building looks better on television.

It was a rather subdued crowd, very straight looking, mostly older, many of them probably parents of homosexuals. A couple of "statements" were read, one entitled "My Name is Not Et Cetera." It was listened to silently and at the end acknowledged with polite applause. Kind of a take off on some famous speech I think: "My name is gay! my name is lesbian! My name is transgender! My name is homophobe!" Etc. Really bad poetry.

Here's a few photos that I took. 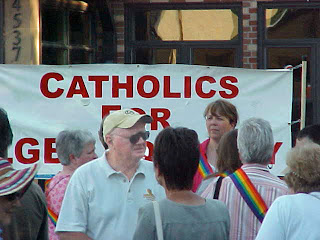 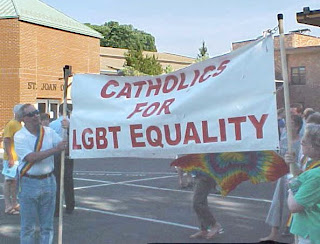 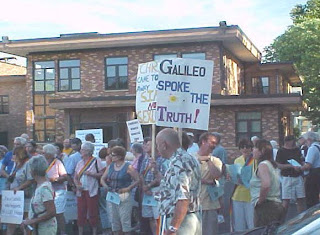 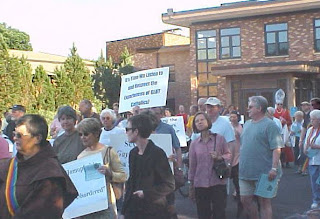 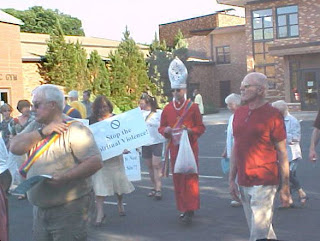 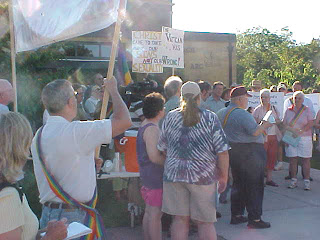 Was there anyone under 40 there?

I'd ask if there was anyone under 50 there, Ter!

We need to pray for them and help educate them in a compassionate manner.

We need to pray for the archbishop and those priests who uphold the Church's teaching as this could get really ugly.

When are gays going to get it through their skulls that they are people just like the rest of us and not some priveleged super-species? No such thing as a straight Catholic or a gay Catholic--just Catholics! We either subscribe to what the Holy Church teaches or take our chances elsewhere. Even misguided, aging hippies and their emotionally-challenged admirers should be able to get this.

Just my Two cents here. It is time for the Archbishop to start doing his job. Change is a slow process in the church when its done right. SJA has been a problem since the 1960's. It started with Fr. Harvey Egan, continued with Fr. George Wertin and now with Fr. Jim Debrucker. Fr. Debrucker actually dresses the part as pastor, however he is a failure to actually do his job as a teacher. It is time to leave the 1960's behind and catch up with the new evanglization. They have corrected St. Stephens, Is Joan of Arc next?

Is that guy in the red cassock suppose to be Archbishop Nienstedt? He should be arrested for impersonating clergy.

Whoa nelly! Bigotry at its finest. You guys aren't doing yourselves any favors, and I come from a very-Catholic very-pro-gay family.