.
For the past 25 years, the time of my still ongoing reversion to the Church after a period nearly equally as long when going to Church was only important when my Mom was present. Not out of anger at anything. Just sloth, acedia, spiritual laziness, I thank God daily for His Mercy for calling me back.

The biggest shock was not the changes that I found in the parishes in the Twin Cities. It was the secularization of Canada, especially Quebec, the spiritual home of the North American Church. Quebec is the home of the Shrine of Ste. Anne de Beaupre, the grandma of Our Lord who came through with miracles for my grandma and my great-grandma, for certain, and I wouldn't be surprised to learn that when my Mom visited there, I was high on her intentions list. Moms know everything about their kids.

I've been putting off visiting the Shrine because of the horrors I have heard about the Church in Quebec and elsewhere in Canada.

But maybe God, in His Mercy, has begun to call them home, too. 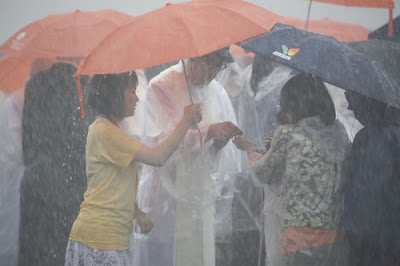 On this patronal feast of the place founded four centuries ago as New France, the True North's Fr Raymond deSouza recaps the Eucharistic Congress in the context of a stirring renaissance for the long-beleaguered church in Quebec:

It has been oft-remarked — and oft-celebrated, to be sure — that Quebec’s faith seems to be a thing of the past, an obstacle to development and progress best left behind without nostalgia. The result has been the spectacular dismantling — sociologically speaking, overnight — of what was once perhaps the most Catholic corner of the world. For many observant Catholics in Quebec, the rapid and aggressive secularization of the culture has been a cause of discouragement and even despair. For the Church, the pain of souls turning away from Christ was compounded by an internal crisis of confusion about the faith itself. Was there room in Quebec for a confident Catholic voice?

That confusion and fear was left behind last week. There is nothing more fundamental to the Catholic faith than the Eucharistic — the belief that Jesus Christ is truly present in the sacrament under the appearance of bread and wine. During the congress, Catholics from around the world joined the Church in Quebec to proclaim that faith. And on Thursday evening, when 20,000 pilgrims filled the streets of the Old City in a Eucharistic procession, the Church in Quebec proclaimed her faith with serenity and confidence, unapologetic about taking her place in the culture that she did so much to shape.

The exuberance of the congress, especially with young people from across Quebec and Canada as key participants, hinted that something new was on the horizon in Quebec. On Friday evening, when twelve men were ordained priests at the hockey coliseum, the 12,000-strong congregation broke the constraints of normal liturgical practice, applauding and cheering as if, well, they were at a hockey game.

“Twelve new priests — like the twelve apostles — for a new foundation for the Church in Quebec!” said Father Stéphane Pouliot, who had invited me to the ordination. He is himself a young, vibrant priest from south of Quebec City. 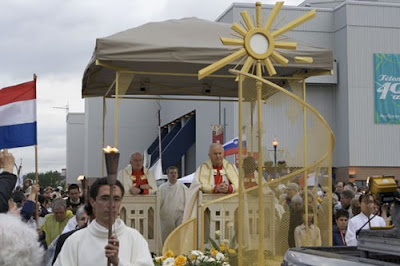 “I feel as if I was raised from the dead,” said Cardinal Marc Ouellet, Archbishop of Quebec, demonstrating that it was not only the young who were deeply affected by the week-long congress. “I believe that we have reached a turning point in the history of the Catholic Church in Quebec.”

Cardinal Ouellet is not customarily a man of extravagant rhetoric, so his words indicate that something important is afoot. The quadrennial Eucharistic congresses are planned years in advance, so when it was announced in 2004 in Guadalajara, Mexico, that Quebec would be the next host, no one could have known that Quebec society was about to begin a contentious conversation about its culture and identity....

In the history of cultures and nations it is usually only possible to identify a turning point well after the fact. And so it will not be possible to know what the impact of Quebec 2008 will have on the future. But for those who were here last week, it seemed that a corner was turned. And for that, this year will mark a very happy St. Jean Baptiste indeed.

Whispers in the Loggia
Posted by Unknown at 12:49 PM

What a hopeful, happy occasion!

I was at the Congress with 5 other pilgrims from MN. It was truly an inspirational week. I wish every Catholic had the opportunity to attend such an event. It renews one's faith. Yes, there is great hope for Canada, and it's founded in the Eucharist.

Thanks for sharing on your pilgrimage, mskluz.

It's my understanding that the Archdiocese here will be putting on a Eucharistic Celebration of some sort this coming November at the Excel Center.

Let's begin to pray that this celebration will be an inspiration to countless thousands whose faith has shriveled over the years. The Lord is calling them.