As floodwaters rise in Fargo, Bishop Aquila prays for hope and strength 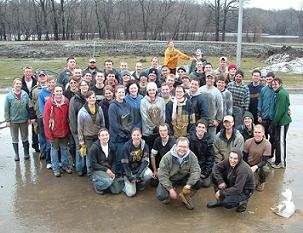 Seminarians, college students and volunteers sandbagged
Cardinal Muench Seminary against the rising waters of the Red River.
.
As the waters of the Red River rise to record levels, Bishop of Fargo Samuel Aquila has emphasized the irreplaceable nature of human life and has praised the “wonderful” work of those combating the flood. He has also prayed for hope and strength for the disaster’s victims.

The Red River approached a depth of 41 feet on Friday, exceeding the Fargo record of 40.1 feet. It is expected to crest by Saturday at a depth of 42 feet.

Tanya Watterud, Director of Communications for Diocese of Fargo, told CNA that a reported three million sandbags have been filled in Fargo.

Sections of Fargo and its immediate neighbor Moorhead, Minnesota have been evacuated because of concerns about the dikes.

“However, Fargo remains pretty confident. Dikes are holding and contingency dikes are in place,” she said.

Elsewhere the situation appears more dire. Watterud said that Shanley High School, Sts. Anne & Joachim Church and the Diocesan Pastoral Center will take on water if the earthen levy to their south gives way. Yesterday, Shanley High School was used as a drop point for those rescued by helicopter.

A reported 180 people were evacuated from MeritCare Hospital overnight. The evacuation was ordered not because of flood water, but in preparation for medical care needed in the event the dikes do not hold.

Delta Airlines is also lending a hand to the flood victims by sending planes with volunteer crews to Fargo to help evacuating the elderly.

Watterud passed on Diocesan Chancellor Fr. Luke Meyer’s report that St. Benedict’s Church in Wild Rice, just south of Fargo, is ringed by a dike under pressure from the floodwaters.

Fargo’s junior seminary, Cardinal Muench Seminary, has been partially evacuated. Those few who remain, including rector Msgr. Gregory Schlesselmann, are ensuring that the flood pumps remain working at the seminary.

A travel ban has cleared the city’s streets so that trucks shipping sandbags and dirt for earthen dikes can rapidly travel through the city.

“The trucks travel with police escort - a police car with lights flashing and sirens sounding in front, then one, two or three trucks, followed by another sirened, flashing police car,” Waterrud told CNA.

Thousands have helped make sandbags and build dikes in recent days, though this work has slowed because of travel restrictions. More than 1,000 members of the National Guard are in the city to assist with patrolling the dikes.

“Every dike must be watched for cracks, seepage, and seepage must be pumped back over into the river,” Watterud said, explaining that sandbags are freezing because of the cold weather.

“They must be soft to make a good dike, so people are dropping them onto concrete or the hard ground to break up the frozen sand before placing them onto dikes,” she explained.

On Tuesday, Bishop Aquila toured areas where sandbagging was taking place. On Thursday he helped fill sandbags at the Fargodome stadium.

Speaking to radio interviewer Scott Hennen on AM 1100 on Thursday night, he reported that a man who had no legs was there helping tie the sandbags.

“It's a great witness. It's a great morale booster. It's wonderful to see how people are looking out for each other,” he said.

In his interview Bishop Aquila encouraged listeners to “focus on God and the presence of God in our lives,” noting that though material possessions can be replaced, “a human life, you can never replace.”

The bishop said he himself has taken some precautions such as moving possessions up from the lower levels of his home. He then reported he would evacuate if necessary.

He also called for prayer, saying, “One of the important things we must do is really pray for the virtue of hope and keep our eyes on the future. If it means rebuilding the city, other cities have done it.”

Telling listeners that God will give them strength to endure “if we keep our focus on him,” Bishop Aquila prayed that God would “bestow upon us all of the graces that we need at this time, to strengthen our faith our hope and our charity, that we may know that he is with us.”

Praying for protection for cities, counties, and flood-struck areas, he especially prayed that God would protect “all of our families,” most especially those who are homeless and elderly” and would “help our hearts to be attentive to them and to serving them.” Catholic News Agency

From Father Z, from the Missale Romanum: