Archbishop Vlazny of Portland, OR, former Bishop of Winona, to Retire

Archdiocese of Portland, OR

Posted by Unknown at 7:29 AM No comments:

Lent's coming this Wednesday; Fr. Z has some Confession Tips for You

1) …examine our consciences regularly and thoroughly;
2) …wait our turn in line patiently;
3) …come at the time confessions are scheduled, not a few minutes before they are to end;
4) …speak distinctly but never so loudly that we might be overheard;
5) …state our sins clearly and briefly without rambling;
6) …confess all mortal sins in number and kind;
7) …listen carefully to the advice the priest gives;
8) …confess our own sins and not someone else’s;
9) …carefully listen to and remember the penance and be sure to understand it;
10) …use a regular formula for confession so that it is familiar and comfortable;
11) …never be afraid to say something “embarrassing”… just say it;
12) …never worry that the priest thinks we are jerks…. he is usually impressed by our courage;
13) …never fear that the priest will not keep our confession secret… he is bound by the Seal;
14) …never confess “tendencies” or “struggles”… just sins;
15) …never leave the confessional before the priest has finished giving absolution;
16) …memorize an Act of Contrition;
17) …answer the priest’s questions briefly if he asks for a clarification;
18) …ask questions if we can’t understand what he means when he tells us something;
19) …keep in mind that sometimes priests can have bad days just like we do;
20) …remember that priests must go to confession too … they know what we are going through.

Posted by Unknown at 9:19 PM No comments: 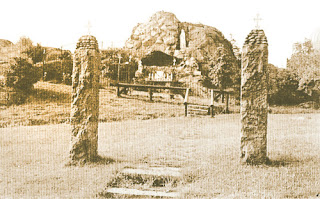 .
When Robin Mainella looks at the fenced-in, rocky patch of land just west of the Observation Hill Children’s Center, she sees a piece of history, and more.

“This is definitely a sacred place,” the Duluth woman says as she looks up at an overgrown mound of rock once the site of the Grotto of Our Lady of Lourdes.

The rocky rise, snug up against city land that once was home of the Darling Observatory, belongs to Bill and Trish Irving, who own the day care center on West Third Street off Mesaba Avenue. East of the center is a privately owned home that used to be the St. Peter’s Church rectory, and east of that is the church itself, which was closed in late 2010.

In 1945, all of the land belonged to the church, which served Duluth’s “Little Italy,” but there was no rectory and no school building. And the church’s priest, Father John Zarrilli, had a vision for the rocky hill above the church. He wanted an appropriate welcome home for men from Duluth’s Italian community who had served the country in World War II. The shape of the mound inspired his vision of what that tribute would be. The stone masons who were part of the St. Peter’s parish gave him the means.

“The same stone masons who built the church … and Enger Tower built this,” said Mainella, 54. “The stone masons … took a picture of the grotto that’s in Lourdes, France, and they replicated it. And they did a darn good job.”

Americans from Duluth who served in World War II. Seven of them didn’t come back, Mainella said. A bronze plaque had the words: “Dedicated to St. Peter’s Church boys and all Italian-American boys of Duluth who served in the Second World War 1941-1945. Erected in honor of Mary, the Queen of Peace, praying that she may implore a lasting peace for America and the world.”

The altar was visible earlier this week amid the overgrowth, mostly covered in snow. The statues, the bronze plaque and the time capsule all are gone. Mainella said she’s determined to find the time capsule, but she has no idea where it is.

The Irvings, who bought the property from other private owners in 1996, have seen it.

“Unfortunately, that disappeared with a group of people who came by a few years back,” Bill Irving said.

The Irvings don’t know the names of the people who came for the time capsule about a decade ago, but they understood them to be members of the Italian-American Club. Some of them may have been named in the time capsule, Bill Irving said. The plaque had been stored in their building’s basement since before they bought it, and the group took that as well, he added.

Mainella, whose links to the church go back three generations, said the time capsule never should have been removed. She also thinks the grotto should be restored. “It might not be able to be restored to the extent that some people might consider restoration,” she said. “It certainly could be cleaned up.”

Mainella said she’s willing to do much of the work herself. She also has peppered people involved in historic preservation and veterans issues with e-mails advocating the grotto’s restoration. The response has been tepid.

“It’s kind of hard to tell how large a significance it had to the veterans community when it was there,” Hartman said. “It probably had more significance to the church. Most veterans today don’t even know it existed.”

Kyle Eller, spokesman for the Diocese of Duluth, said the diocese is favorable in general toward anything that enhances devotional life. But the diocese would be unlikely to take a position on restoring the grotto, he said.

The Irvings have allowed Mainella and others access to the property, but they’re wary of restoration talk.

“If we have to give up the rights to the property, I’m not in favor of that at all,” Bill Irving said. “If she’s going to make it into a historical site which precludes us from selling it, that ain’t going to happen.”

Mainella said she wouldn’t even know how to get the grotto designated as a historic site, although she is part of an effort to have the nearby church named a historic landmark.

“Maybe it just needs to be restored, cleaned up and enjoyed,” Mainella said. “It was beautiful, and it could be beautiful again.” Duluth News Tribune

Posted by Unknown at 5:51 AM No comments: