.
On Easter morning, March 25, 1951, the Catholic priest mounted the steps of a partially destroyed church, and turned to face his congregation, some 60 men – gaunt, foul-smelling, in tattered clothing.

Fr. Emil Kapaun raised a small, homemade, wooden cross to begin a prayer service, led the men in the Rosary, heard the confessions of the Catholics, and performed a Baptism.  Then, he wept because there was no bread or wine to consecrate so that the men could receive the Eucharist.

The U.S. Army chaplain, with a patch covering his injured eye and supported by a crudely-made cane, may have been broken in body, but was strong in spirit.

The following Sunday, Fr. Kapaun collapsed.  His condition was serious – a blood clot, severe vein inflammation, malnutrition – but the Chinese guards in the North Korean prison camp would allow no medical treatment, not even painkillers.  After languishing for several weeks, he died on May 23 and was buried in a mass grave.

Emil Kapaun was born on April 16, 1916 to a poor, but faith-filled farm family on the prairies of eastern Kansas.  Life was hard and even children had to learn to be resourceful as mechanics and carpenters and to care for the animals during bitter winters and brutally hot summers.  With a strong desire to become a priest, he attended Benedictine Conception Abbey to complete high school and college, continued his studies at Kenrick Seminary in St. Louis, and was ordained in 1940.

When the United States entered World War II, he asked to become a military chaplain.  His bishop initially refused, but later relented.  Fr. Kapaun enlisted in 1944 in the Army, served for two years in Burma and India, then returned to civilian life.  Two years later, he reenlisted and was assigned to the 1st Cavalry Division in Japan.

In June 1950, a North Korean army crossed the 38th parallel, and advanced quickly toward Seoul, South Korea.  The U.S. intervened militarily, with the 1st Cavalry Division executing an amphibious landing to block the advancing army.  The enemy onslaught was severe and the U.S. units soon were in retreat.  Fighting was intense.  Fr. Kapaun, with his soldier-parishioners in danger, was tireless.  He moved among the GIs, ignoring enemy fire, comforting the wounded, administering the last rites, burying the dead, and offering Mass whenever and wherever he could.  On one occasion, he went in front of the U.S. lines, in spite of intense fire, to rescue a wounded soldier.

By August, the U.S. troops had been pushed to the southern end of Korea, near the port of Pusan.  Then, on September 15, 1950, the war took a radical turn when U.S. troops landed at Inchon behind the invading army.  The North Korean forces fled northward, with the Americans in pursuit.  Within a few weeks, the 1st Cavalry Division had crossed the 38th parallel.  Unknown to them, China, which had secretly moved a huge army into North Korea, was about to enter the war.

The night of November 1 was quiet.  Fr. Kapaun’s battalion, having suffered some 400 casualties among its roster of 700 soldiers, was placed in a reserve position.  Chinese troops, however, had infiltrated to within a short distance of them.  Suddenly, just before midnight, there was a cacophony of bugles, horns and whistles, as the enemy attacked from all sides.

Fr. Kapaun scrambled among foxholes, sharing a prayer with one soldier, saying a comforting word to another.  He assembled many wounded in an abandoned log dugout.  All the next day, he scanned the battlefield and, some 15 times, when he spotted a wounded soldier would crawl out and drag the man back to the battalion’s position.  By day’s end, the defensive perimeter was drawn so tightly that the log hut and the wounded it contained were outside of it.  As evening came and another attack was imminent, the chaplain left the main force for the shelter so that he could be with the wounded.  It was soon overrun, and Fr. Kapaun pleaded for the safety of the injured.  Approximately three-quarters of the men in the battalion had been killed or captured.

Hundreds of U.S. prisoners were marched northward over snow-covered crests.  Whenever the column paused, Fr. Kapaun hurried up and down the line, encouraging the men to pray, exhorting them not to give up.  When a man had to be carried or be left to die, Fr. Kapaun, although suffering from frostbite himself, set the example by helping to carry a makeshift stretcher.  Finally, they reached their destination, a frigid, mountainous area near the Chinese border.  The poorly dressed prisoners were given so little to eat that they were starving to death.

For the men to survive they would have to steal food from their captors.  So, praying to St. Dismas, the “Good Thief,” Fr. Kapaun would sneak out of his hut in the middle of the night, often coming back with a sack of grain, potatoes or corn.  He volunteered for details to gather wood because the route passed the compound where the enlisted men were kept, and he could encourage them with a prayer, and sometimes slip out of line to visit the sick and wounded.  He also undertook tasks that repulsed others, such as cleaning latrines and washing the soiled clothing of men with dysentery.

Fr. Kapaun’s faith never wavered.  While he was willing to forgive the failings of prisoners toward their captors, he allowed no leeway in regard to the doctrines of the Church.  He continually reminded prisoners to pray, assuring them that in spite of their difficulties, Our Lord would take care of them.  As a result of his example, some 15 of his fellow prisoners converted to the Catholic Faith.

Fr. Kapaun’s practice of sharing his meager rations with others who were weaker, lowered his resistance to disease, and eventually to his death.  For his heroic behavior, he received many posthumous honors, including the Distinguished Service Cross and Legion of Merit, had buildings, chapels, a high school, and several Knights of Columbus councils named in his honor, and is currently being considered for the Medal of Honor.  In 1993, the Pope declared Fr. Kapaun a “Servant of God,” and his cause for canonization is pending.

It was announced in February of 2013 that Father Kapaun will be receiving the Congressional Medal of Honor, the nation's highest honor, posthumously, in April of 2013.

The Three Absolvers and Cardinal Arinze on Examinations of Conscience

Don't believe in Mortal Sin?  Francis Cardinal Arinze would like to chat with you, NOW!


Sr. Mary Ann Walsh with the USCCB has ten good, practical reasons for going to Confession regularly, with one really important reason added by Fr. Z!

Commandments of the ChurchIII. To confess our sins to a priest, at least once a year.

IV. To receive Our Lord Jesus Christ in the Holy Eucharist at least once a year during Easter Season. 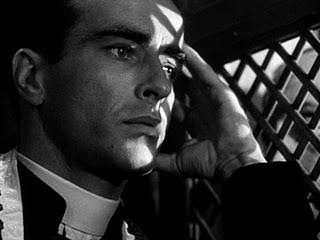 Father George Rutler, author, preacher and pastor of the Church of Our Savior in Manhattan, has ten pages on "How to Make a Good Confession."
Father Robert Altier, preacher and chaplain in Hastings, MN, has a wonderful "Examination of Conscience" for you. "Keep custody of those eyes!"

Father John Zuhlsdorf [Fr. Z.] on "I haven't been to Confession for ten years; I don't know what to do!Fr. Z, again: Why I still have this blog: a reader’s testimony


And here are two more useful Examinations for children:


Click Here for an Examination of Conscience for Children

You say that you think that you prefer to confess your sins directly to God? You don't need to do it to a priest? Read what Francis J. Beckwith, Professor of Philosophy and Church-State Studies at Baylor University, former President of the protestant Evangelical Theological Society, and a convert in April 2007 to the Catholic Church has to say on the matter.

Posted by Unknown at 7:32 AM No comments: 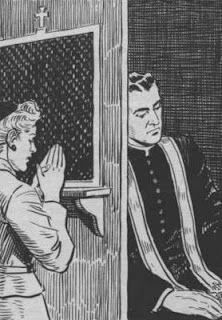 .
Two of this area's most prolific and respected bloggers, Adoro and Terry, coincidentally posted recently on difficulties in finding a place to go to Confession. Jeepers, you'd think with 230 parishes in our archdiocese, that should be no problem.

Well, the problem is that most parishes seem to make it available on Saturday afternoons between 3:00 and 5:00, before the Vigil Mass. In days of yore, the kids went to confession on Friday afternoons, I believe, and the grown ups lined up on Saturday mornings or during parish missions or Holy Week. Maybe the problem is that we don't see many lines any more so pastors aren't offering it more often.

But a major logistical problem with sin is that it just does not happen only on Friday nights. Sin is a 24/7 event, sadly, for most of us. Therefore, it is great when we can get dash on over to the morning Confessional line, encounter only a few ahead of us and get shriven of our sins so we can face the day with joy.

Therefor the Official Minnesota Catholic Directory (a two year old edition) was scoured for those parishes that offer Confession on a daily basis (bold type) or at other times than Saturday afternoons.

Tape this to your refrigerator along with the kids homework, your workout schedule or your weight loss stats. Isn't your spiritual health as important as other important parts of your life?