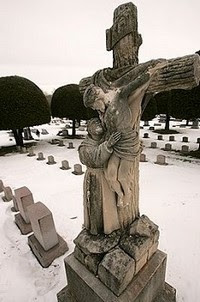 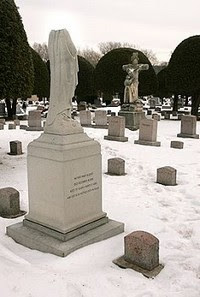 Large statues of the Virgin Mary and Jesus on the cross in a Rochester, Minn., cemetery were severely damaged and would require hundreds of thousands of dollars to replace, the cemetery director said today.

An Our Lady of Lourdes statue of Mary had its head and arms "busted off" and the Jesus on the cross statue has damage from efforts in recent days to chop off its head, said Calvary Cemetery director Robert Gumbusky.

The statues stand where nuns from the nearby Sisters of St. Francis of Rochester are buried, he said. A nun visiting the cemetery noticed the damage, he said.

"The nuns are very concerned and sad about it also," Gumbusky said. "This is the cemetery where most of them are buried."

As for the perpetrators, he said: "What kind of mindset do these people have to do something like this? I hope we're able to catch whoever did this because you're talking a lot of dollars here."

Police are "not optimistic" that they will find those responsible, said Capt. Brian Winters, unless the head from the Our Lady of Lourdes marble statue surfaces. There were no witnesses, and police said that the time frame for when the crime was committed stretches from late November to early this month.

There have been previous incidents of vandalism at the cemetery, Gumbusky said, but nothing close to this extent. He said the cemetery might have to start locking the gates at night, something it has never had to do.

This is truly a sad story. The photo makes me cry. Be assured of my prayers for this community and for the ones who did this terrible this thing.