Karol Wojtyla Beatified. "They Will Look Upon Him Whom They Have Pierced"

"However, [in 2000] he certainly never publicly asked forgiveness for the sexual abuse of children committed by priests. But there is also no record of anyone leaping up in 2000 to castigate him for this omission. The scandal was still not big enough, for the distracted masters of public opinion at the time. Now the same ones who were silent then [now] accuse him of that silence, they accuse him of letting himself be snared by the disgraced priest Marcial Maciel. But these are posthumous accusations that reek of hypocrisy." 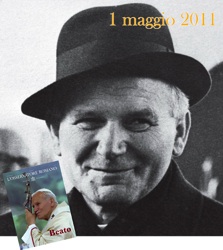 ROME, May 1, 2011 – In Polish, he used to say of himself in his last years: "I am a biedaczek, a wretch." A poor old man, sick and worn out. He, so athletic, had become the man of sorrows. And yet it was precisely then that his holiness began to shine, inside and outside of the Church.

Before that, instead, pope Karol Wojtyla was admired more as a hero than as a saint. His holiness began to conquer the minds and hearts of many men and women from all over the world when what Jesus had prophesied for the old age of the apostle Peter happened to him: "Amen, amen, I say to you, when you were younger, you used to dress yourself and go where you wanted; but when you grow old, you will stretch out your hands, and someone else will dress you and lead you where you do not want to go."

Now that he has been proclaimed blessed, John Paul II is unveiling to the world the truth of the saying of Jesus: "Blessed are the poor, for theirs is the kingdom of heaven."

He did not radiate holiness in the hour of his triumphs. Much of the acclaim that he received while he was traveling the world at a breathtaking pace was too biased and selective to be sincere. The pope who knocked down the iron curtain was a blessing in the eyes of the West. But when he fought in defense of the life of every man born upon the earth, in defense of the most fragile, smallest life, the life that has just been conceived but whose name is already written in heaven, then few listened to him and many shook their heads.

The story of his pontificate was for him a matter of lights and shadows, welcome and rejection, with strong opposition. But but his dominant profile, for many years, was not that of the saint, but of the combatant. When in 1981 he had a brush with death, shot for reasons still not entirely clear, the world bowed in reverence. It observed its minute of silence, and then went right back to the same old unfriendly song.

Many in the Church also distrusted him. For many, he was "the Polish pope," representing an antiquated, antimodern, populist Christianity. They looked not at his holiness but at his devotion, which wasn't a hit with those who were dreaming of an interior and "adult" Catholicism, so obligingly immersed in the world as to become invisible and silent.

And yet, little by little, from the crust of the pope as athlete, hero, fighter, devotee, his holiness also began to unveil itself.

The jubilee, the holy year of 2000, was the turning point. Pope Wojtyla wanted it to be a year of repentance and forgiveness. On the first Sunday of Lent that year, March 12, before the eyes of the world, he presided over an unprecedented penitential liturgy. Seven times, for the seven capital vices, he confessed the sins committed by Christians century after century, and asked God's forgiveness for all of them. Extermination of heretics, persecution of the Jews, wars of religion, humiliation of women... The pope's anguished face, already marked by illness, was the icon of that repentance. The world looked at him with respect. But also with derision. John Paul II exposed himself, defenseless, to blows and insults. He let himself be scourged. There were some who demanded more repentance each time, for yet more faults. And he beat his breast for all of it.

However, he certainly never publicly asked forgiveness for the sexual abuse of children committed by priests. But there is also no record of anyone leaping up in 2000 to castigate him for this omission. The scandal was still not big enough, for the distracted masters of public opinion at the time. Now the same ones who were silent then accuse him of that silence, they accuse him of letting himself be snared by the disgraced priest Marcial Maciel. But these are posthumous accusations that reek of hypocrisy.

The ones who understood what was true in the holiness of that pope were the millions and millions of men and women who bestowed on him the most grandiose collective "thank you" ever given to a man in the past century. The heads of state and government of almost two hundred countries who flocked to his funeral in Rome did so in part because they could not stay away from that wave of admiration that was sweeping over the world.

But John Paul II also wanted that jubilee of 2000 to be the year of the martyrs. The countless martyrs, many of them nameless, killed out of hatred for the faith in that "Dominus Iesus" whom the pope wanted to reaffirm as the only savior of the world, for the many who had forgotten about him.

And the world intuited this: that in the suffering figure of the pope was the beatitude that God had promised to the poor, to the afflicted, to those who hunger for justice, to the peacemakers, to the merciful. The pope mocked, opposed, suffering, the pope who was gradually losing the use of speech was sharing in the fate that Jesus had proclaimed to his disciples: "Blessed are you when they insult you and persecute you and utter every kind of evil against you falsely because of me."

The beatitudes are the biography of Jesus, and therefore of those who follow him with pure hearts. They are the image of the new world and of the new man that Jesus inaugurated, the overturning of worldly criteria.

"They will look upon him whom they have pierced." As beneath the cross, many today see in the beatified Karol Wojtyla an anticipation of paradise.


[This commentary was written by Sandro Magister for "La Tercera," the leading newspaper of Chile, and published on the day of the beatification of John Paul II, May 1, 2011]. Chiesa
Posted by Unknown at 7:44 PM