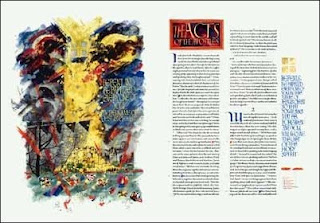 St. Paul, Minn. – When The Dead Sea Scrolls exhibition makes its debut at the Science Museum of Minnesota on March 12, 2010, it will include a gallery devoted to The Saint John’s Bible. Displaying the original folios from The Saint John’s Bible, which is the world’s newest hand-scribed illustrated Bible, and the first to be commissioned in 500 years, provides a compelling juxtaposition with the Dead Sea Scrolls, which are the oldest hand-scribed biblical manuscript by centuries.

Commissioned by Saint John’s Abbey and University in Collegeville, Minnesota, The Saint John’s Bible is a contemporary work created in the tradition of the medieval manuscripts and is the first handwritten, illuminated Bible to be commissioned by a Benedictine monastery since the advent of the printing press more than 500 years ago. Working with a team of theologians from Saint John’s Abbey and University and artists from both the United Kingdom and the United States, the Bible’s artistic director, Donald Jackson, has spent the last eleven years working in Wales, scribing and illustrating the manuscript. In their work on The Saint John’s Bible, Jackson and his team have used quills fashioned from turkey, swan and goose feathers, as well as paints and inks hand-ground from minerals and stones such as lapis lazuli, malachite, and vermillion as well as 24-karat gold, silver and platinum leaf.

The exhibition at the Science Museum will include original folios, or individual vellum pages, from the recentlycompleted volumes of The Saint John’s Bible: Prophets and Wisdom Books. Neither of these volumes have been displayed in the Twin Cities before. Highlights will include Vision of Isaiah, Suffering Servant, Valley of the Dry Bones, Ezekiel’s Vision of the New Temple, Job Frontispiece, Seven Pillars of Wisdom and The Garden of Desire. In addition, the exhibition will feature original artist tools, sketches and materials from Jackson’s scriptorium.

When completed in early 2011, The Saint John’s Bible will be composed of seven volumes: Gospels and Acts; Psalms; Pentateuch; Wisdom Books; Prophets; Historical Books; and Letters and Revelation. Work on the Bible continues today, with five of the seven volumes already complete. All of the folios are unbound and will remain that way until all seven volumes are completed, at which time each volume will be bound separately. For more information about The Saint John’s Bible please visit www.saintjohnsbible.org.

The calligraphy in the new Bible is, from what I've seen, quite beautiful. The "art" however is the usual modern garbage. It is an illustration of the truth of Leonardo da Vinci's statement, "The supreme tragedy is when theory outstrips performance". Unfortunately, the "art" ruins an otherwise noble venture.