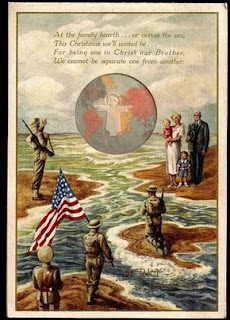 .
Two military chaplains who died on duty, and who have since been declared Servants of God, were presented as models of generosity by the Archdiocese for the Military Services.

Bishop Richard Higgins, archdiocesan administrator and vicar for veterans affairs of the military archdiocese, said this in a statement issued today in honor of Veterans Day, to be observed this Sunday.

The bishop said Father Emil Kapaun (1916-1951) and Father Vincent Capodanno (1929-1967) "exemplified the best characteristics of true Christian generosity and compassion for their brother soldiers. In giving their lives in the service of God and country, they lived the Gospel message of 'laying down one's life' for one’s friends and fellow soldiers."

Efforts are being made to have both men canonized as saints of the Church.

Father Kapaun, a native of Kansas, served as an Army chaplain during the Korean War. The captain was taken as a prisoner of war on Nov. 2, 1950, seized by the enemy as he administered the last rites to a dying soldier.

During the seven months he spent in prison, Father Kapaun nursed the sick and wounded until a blood clot in his leg prevented his daily rounds. Moved to a hospital, but denied medications, his death soon followed on May 23, 1951. He was decreed a servant of God in 1993.

Father Capodanno, a native of New York, was first a Maryknoll missionary serving in Taiwan and Hong Kong before he served as a navy chaplain in Vietnam beginning in 1966. Upon completing his first tour of duty with the 7th Marine Regiment, the lieutenant asked for an extension. He then served in a naval hospital until he was assigned to the 5th Marine Regiment.

The priest, nicknamed the "Grunt Padre," volunteered to assist his men during the intense fighting of Operation Swift, on Sept. 4, 1967. He was wounded in the face, and suffered another that almost severed his hand, but he continued working to administer last rites to the dying.

He was fatally shot while attempting to help to a corpsman. He was posthumously awarded the Medal of Honor in 1969, and was declared a servant of God in 2006.

"Today," said Bishop Higgins, "we pay tribute to every man and woman who faithfully served in the noble causes of securing peace and freedom in the military service of our great nation. Whether storming the beaches of Normandy, battling the brutal winters of Korea, enduring the steaming jungles of Vietnam, or securing order to distant and troubled lands in the Middle East, our American service members exemplify a true culture of generosity.

"The same devoted spirit that drove our patriotic ancestors to fight alongside General Washin! gton and General Patton still rings true for those who fight alongside our current generals in Iraq, Afghanistan and wherever American troops are deployed."

The Archdiocese for the Military Services serves Catholics in the Army, Navy, Air Force, Marine Corps, Coast Guard, Medical Centers and Government Services Overseas. Zenit
Posted by Unknown at 3:56 AM

I've never been a "super-patriot", never joined the Legion or the VFW (the latter because I don't think I was eligible), but I am proud to have served.

Sadly, I wasn't practicing my faith in those days (I thank Him that He kept calling me back); All the chaplains that I have met have been inspiring men. Bishops should make appoint of requiring their young priests to serve their country for a few years before taking on a parish.

I'd bet that an extremely low number of the problems that the Church has experienced in the last 40 years were caused by priests who had been chaplains.

If nothing else, they learn that obedience is not a joke!