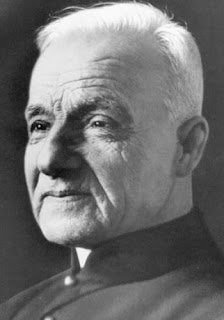 .
If there is a saint in your family, this is how you might tell people: My aunt is a saint …being married to that husband of hers.

But there are folks in the Winona area who really do have a saint in the family since Brother André Bessette, CSC, was canonized by Pope Benedict XVI on October 17, 2010.

Winona resident Lynn Kujak, Plainview resident Mary Deming, and Richard Leonard of Mantorville are all great-grandchildren of Lucie Bessette, a fifth cousin of Saint André, or Frere André, as he was a French Canadian member of the Holy Cross Brothers, and is sometimes referred to as Saint André of Montreal.

Their father, Vincent Leonard, was born in Delavan, Minnesota, in 1905, the son of Alexander Leonard and Rosana Perrizo and the grandson of Joseph Leonard and Lucie Bessette of Blue Earth, Minnesota. Vincent married Louise Duellman in 1937 at St. Mary’s Church in Winona, and he died in Winona in 1990. The surname Leonard is an Anglicized version of their French name, Lyonnais.

Vincent’s father died in 1919, the result of tuberculosis contracted in the Influenza Epidemic of 1917. In 1921, he was sent to the boarding school in Rollingstone, after which he worked for local farmers, surviving the Depression. His mother and two siblings died of tuberculosis, and his remaining two brothers moved to California. But Vincent found work in Winona, met Louise Duellman, married, and settled in Rollingstone, where they bought a home in 1942. During WWII, Vincent moved to California to work in the shipyards, but returned to Rollingstone where he raised his family. He was widowed in 1953 when Louise died.

Vincent’s distant cousin, Alfred Bessette, was born August 9, 1845, in a small town southeast of Montreal, Quebec. He was so frail at birth that the priest gave him an emergency baptism. He was one of ten children of Isaac Bessette and Clothilde Foisy Bessette. His father was a lumberman, and was killed by a falling tree when Alfred was nine years old. His mother died three years later of tuberculosis.

Alfred went to live with an aunt and uncle, who tried to find him work, but with no education and frail health, finding him any long-term manual labor proved difficult. At the age of 20, he emigrated to the U.S., where he worked in a New England textile mill making cloth for the Union Army uniforms. He returned to Canada in 1867.

His parish priest, recognizing Alfred’s spiritual nature, sent him to the Congregation of Holy Cross in Montreal, saying in a prescient note to the superior, “I’m sending you a saint.” His health made problems for him again, but he was finally accepted by the order of brothers and took the religious name André.

Brother André was given the job of porter, or doorman, at a college in Quebec. He joked that when he came to the college he was shown the door and stayed for forty years. He acted as receptionist and general handyman.

He soon became known for his great devotion to St. Joseph, and people claimed that they had been cured of sickness through Brother André’s intercession. It was André’s influence that accomplished the building of the basilica of St. Joseph Oratory of Mount Royal.

After his death in 1937, at the age of 91, a million people paid their respects. Because of his reputation as a holy man and what seemed to be his healing powers, Brother Alfred was beatified by Pope John Paul II in 1982 and attained sainthood this year.