.
In Memory of Father Tim on Veteran's Day 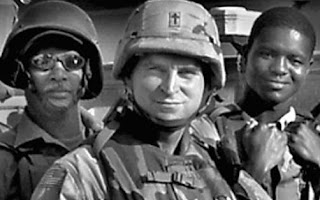 Five years after he was gravely wounded by a roadside bomb in Iraq, the Rev. Tim Vakoc died Saturday night, June 20, 2009, in a New Hope nursing home, according to his family.

The Roman Catholic priest and Robbinsdale native, who was serving as an Army chaplain when he was injured in June 2004, died about 8 p.m. at the St. Therese Care Center surrounded by family and friends, said an entry on his CaringBridge website posted minutes after his death. The entry did not say what caused his death.

His brother, Jeff Vakoc, confirmed the death, but was making funeral arrangements today and was unavailable to provide more details. The Archdiocese of St. Paul did not immediately return a call seeking comment.

Father Tim Vakoc, as he was known, was the first military chaplain grievously wounded in the Iraq war. He was injured by a roadside bomb as he was returning from celebrating mass with the troops on May 29, 2004, the day before the 12th anniversary of his ordination as a priest.

Many thought he would not survive the blast, which cost him an eye and severely damaged his brain. He was hospitalized for four months at Walter Reed Army Medical Center in Washington, D.C., and transferred in a near coma to the Minneapolis Veterans Administration hospital in October 2004.

After numerous surgeries and life-threatening infections, he slowly started to recognize friends and family, and communicate with a squeeze of the hand or a slight smile.

For more than two years, he was in what doctors called a "minimally responsive state."

Then, in the fall of 2006, he spoke for the first time in 2 1/2, raising his family's hopes for an improbable recovery.

Meanwhile, tens of thousands of people followed his story around the world through his CaringBridge website. He also had dozens of regular visitors, many of whom came to pray with him.

He was eventually moved to a nursing home, and used an electric wheelchair to make his way around. He was hospitalized on June 2, 2008, with an infection in the bloodstream.

Vakoc (pronounced VAH-kitch) celebrated the 17th anniversary of his ordination on June 10, according to his CaringBridge site. He followed along in the prayer book and mouthed words.

"In addition, he is now able to sing a bit with the brothers," the entry said. "His attention to the prayers and singing is a sign that his comprehension is deepening, and that he is picking up on more things happening around him."

Vakoc grew up in Robbinsdale, and entered St. Paul Seminary in 1987. He served as a parish priest in St. Anthony and Eagan before becoming an Army chaplain in 1996, and served extended tours of duty in Germany and Bosnia. His family described him as gregarious and adventurous, a devoted soldier who shipped out to Iraq shortly before his 44th birthday. He was promoted to major, and insisted on traveling to danger zones to pray with his fellow soldiers. He was returning to base from one of those trips when the roadside bomb exploded near his Humvee.

He was the youngest of three children of Phyllis and Henry Vakoc. His father died last year. Star Tribune

Click here for all stories about Father Tim found on Stella Borealis.

Thanks for this memorial.

I really like that photograph and the article serves well as a memorial with almost no editing.

I was honored to visit him a few times at the VA. I never felt worthy enough. And he shook my hand once after giving him a "Spiritual Communion."