.
New documents found that reveal the true life of "Mary of Nazareth!"

New truths revealed! ! ! !
Was Mary out for revenge against Herod for throwing her beloved Dad in prison? What happened?
Mary's secret relationship with Barabbas!
Did Mary and Barabbas team up to take Mary's dad down from his own crucifix just in the nick of time?
What happened to break up the relationship between Mary and her "close personal friend" Barabbas?
How Joseph met Mary of Magdala! Where they just pals?
Was Joseph a poor carpenter, or the head of a multi-national construction conglomerate?
How Mary met Joseph!

Were they really married?
Based on extensive historical and biblical scholarship, Mary of Nazareth is a revealing, utterly captivating portrait of a woman whose story we only thought we knew.
Read now, the next "The Da Vinci Code", 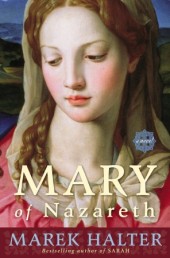 The ancient world and its politics come to life through the eyes of a young Jewish woman, Mary of Nazareth

Miriam–also known as Mary–was born into a Palestine oppressed by Herod the Great; she is accustomed to living with uncertainty and unrest. But when her beloved father is wrongly imprisoned by the Romans, she takes action. She calls upon a well-known rebel by the name of Barabbas, and together they set out to save her father. A daring escape is accomplished and, against staggering odds, Miriam’s father is saved from crucifixion.

Barabbas, flush with the success of the rescue, is intent on leading a full-scale rebellion against Herod and the Romans. Along with Mary and her father, he speaks before Jewish leaders who have gathered from various communities. Miriam feels great frustration as the men endlessly debate morality, the wisdom of rebellion, and the nature of God’s will. Having almost lost her father, and knowing she will be ostracized, she nevertheless speaks out against the use of violence. And to her surprise, one man, Joseph, listens. He offers to take her to Magdala, where she will be allowed to study in the company of intelligent, well-read women. This rare opportunity sets into motion a series of events that will change Miriam’s life–and the history of the Jewish people–forever.

Based on extensive historical and biblical scholarship, Mary of Nazareth is a revealing, utterly captivating portrait of a woman whose story we only thought we knew.

MAREK HALTER was born in Poland in 1936. During World War II, his family escaped the Warsaw ghetto and settled in France. He is the author of several critically acclaimed, internationally bestselling novels, including the Canaan Trilogy: Sarah; Zipporah, Wife of Moses; and Lilah.