India, Exporter of Priests, May Keep Them Home; Part 3 of 3 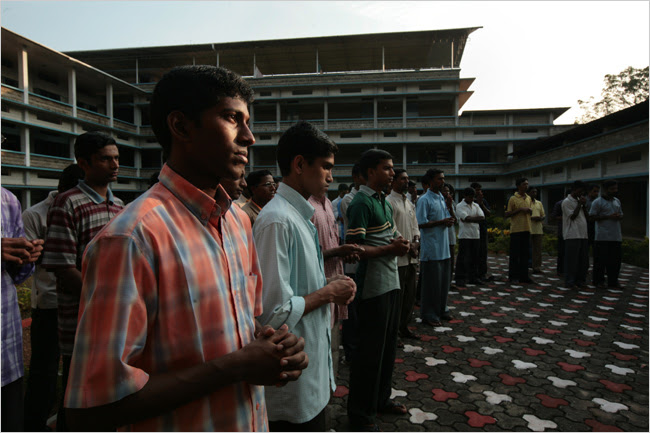 PREPARING FOR PRIESTHOOD Students gather for evening prayers in Aluva, India. Hundreds of young Indians are in seminary, but attitudes are shifting.

ALUVA, India — In the sticky night air, next to a grove of mahogany trees, nearly 50 young men in madras shirts saunter back and forth along a basketball court, reciting the rosary.

A Shortage of Priests

FOCUSED ON FAITH In Kerala, a state in the southwest part of the country where 20 percent of the population is Roman Catholic, families like the Alengadans pray together at home and Mass attendance is high. 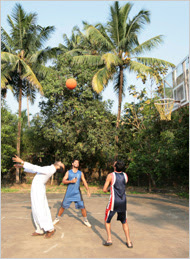 The Rev. Jolly Vadakken, left, with seminarians in Irinjalakuda, had offers to work in Italy and Atlanta but wanted to stay in India.

They are seminarians studying to become Roman Catholic priests. Together, they send a great murmuring into the hilly village, mingling with the Muslim call to prayer and the chanting of Vedas from a Hindu temple on a nearby ridge.

Young men willing to join the priesthood are plentiful in India, unlike in the United States and Europe. Within a few miles of this seminary, called Don Bosco College, are two much larger seminaries, each with more than 400 students.

At least 800 Indian priests are working in the United States alone. India, Vietnam and the Philippines are among the leading exporters of priests, according to data compiled by researchers at Catholic University of America in Washington.

But these days the Indian prelates have reason to reconsider their generosity. With India modernizing at breakneck speed, more young men are choosing financial gain over spiritual sacrifice.

“There is a great danger just now because the spirit of materialism is on the increase,” said Bishop Mar James Pazhayattil, the founding bishop of the Diocese of Irinjalakuda, as he sat barefoot at his desk, surrounded by mementos of a lifetime of church service. “Faith and the life of sacrifice are becoming less.”

Some of the forces contributing to a lack of priests in Europe and the United States have begun to take shape here.

Parents are having fewer children, with even observant Catholics freely admitting they use birth control. The Indian economy, which has boomed for years, offers more career options.

Many priests once came from large agricultural families. But now land is scarce, the soil tapped out. Families are moving to cities, far from the tight-knit parishes that for generations kept Indian Catholics connected to their faith. And educated young Catholics are increasingly attracted to fields like engineering and technology.

In past generations, having a son become a priest increased the family’s stature, said the Rev. Jose Kuriedath, a sociologist in Aluva who has written a book about vocations in India. Mr. Kuriedath recounted an adage in Malayalam, the local language: “It is equal in dignity to have either an elephant or a priest in the family.”

But this is changing.

At St. Paul’s Minor Seminary in the Diocese of Irinjalakuda, sleepy teenage boys clamber from their dormitory every morning down to chapel, past a statue of Mary and portraits of Pope Benedict XVI and Gandhi.

Among them is Chacko Kuttuparambil, a stocky 17-year-old who wears high-top basketball shoes and slim, stylish glasses. His prosperous family was not particularly supportive of his joining the priesthood, he said.

His father, an apartment building manager, wanted him to be a computer engineer. His brother, a business executive, also tried to dissuade him. Chacko is the younger of two sons, and traditionally it is the responsibility of the youngest son to care for the parents in their old age.

But Chacko felt called to the priesthood because, he said, as a child he was miraculously cured of a viral infection that paralyzed the right side of his body for two years.

On a hot day before the rainy season arrived, Chacko and his fellow students boarded a bus for a field trip intended to expose them to ministry work. Along the way, the teenagers clapped and belted out Christian hymns and pop tunes. They craned to look out at billboards of motorcycles, mobile phones and models with bare midriffs advertising sari shops.

The students arrived at a home for mentally ill adults run by an order of nuns in pink saris. Some students initially recoiled at the patients’ odd tics. But as they had been taught, they separated into small groups to talk with the patients, many of whom brightened under the boys’ attention. Most of the students were selected for the seminary after attending a “life guidance camp” that each year draws hundreds of local teenagers for a three-day session at St. Paul’s.

Those who seem promising are invited back for a vocation retreat, and the best of those are invited to join the seminary.

In a first-year class, the students studied a pamphlet called “Growing up Gracefully.” The school’s rector, the Rev. Sebastian Panjikaran, demonstrated proper priestly etiquette. Father Panjikaran acted out the wrong way for a priest to walk through town, charging down the aisle between the students’ desks, his eyes fixed on the ground.

“A priest should not walk so fast,” he said, turning to face the students. “He should walk how?”

“He should walk slowly,” Father Panjikaran repeated, strolling casually up the aisle and making eye contact with the students. “And he should ... ?”

“Help,” the students say in unison.

If you walk slowly, Father Panjikaran explained, the people will see you are friendly and accessible and will ask you for help. He concluded, “You can have that sense of usefulness if you do good for others.”

Catholics represent a tiny proportion of the population in India — about 2 percent. But they have played an outsize role in weaving the country’s social safety net, establishing schools, hospitals, old-age homes and other organizations that serve many non-Catholics.

The church here is ancient, with three separate rites, each with its own liturgies and bishops. Here in Kerala, a state in southwest India, Catholics of the Syro-Malabar rite trace their roots to the Apostle Thomas, who according to lore arrived by boat in A.D. 52, made disciples among the ruling Brahmin class and planted seven churches.

About 20 percent of Kerala’s population is Catholic, and being faithful is more than a once-a-week event. Families pray together at home in the evenings, kneeling at shrines in their sitting rooms. Mass attendance in many dioceses is over 80 percent. And the entire community turns out for local festivals on saints days.

After evening Mass one Sunday at Sacred Heart Keezhmad, the parish just up the hill from Don Bosco College, the young altar boys and some friends were helping the priest close the sacristy. Of eight young men, including the president of the local Catholic youth organization, only one said he was interested in becoming a priest. Six said they aspired to be engineers, and one said he wanted to be a doctor.

Like many seminaries run by religious orders, Don Bosco College traditionally did not accept students who were the only child in their families. But that policy has changed, said the Rev. Sebastian Kalambaden, the seminary’s administrator. The seminary also has two students who were brought up Hindu and converted to Catholicism. Until recently, most seminaries avoided taking converts.

Some graduates and former teachers of Don Bosco College are now serving overseas. The students are aware that if they do well they might be tapped. And many see it as their responsibility to go.

“People came from foreign countries as missionaries, and because of them we have Christianity, and in many ways we are benefiting,” said Augustine Thekkepookombil, a seminarian. “ So I feel it is my duty to give spiritual help. That would be the best way of showing gratitude.”

The Diocese of Irinjalakuda has 10 priests serving in the United States, as well as 3 in Germany, 2 in Canada and one in England. Four are studying in Rome.

In the United States, four of the Indian priests are in Birmingham, Ala., where the former bishop arranged about seven years ago to pay the Diocese of Irinjalakuda $5,000 a year for each borrowed priest, an official in the Indian diocese said. Many bishops have such arrangements, giving them a motive other than generosity to loan out their priests.

Bishop Pazhayattil said he chose which priests to send abroad very carefully. Some who volunteer, he said, could easily go astray so far from home.

And some do not want to go. The Rev. Jolly Vadakken had studied in Rome and worked short-term in parishes in Germany, Minneapolis and Birmingham. Tall and prepossessing, fluent in five languages, Father Vadakken had offers to work as a parish pastor in Italy and Atlanta. But he preferred to stay home.

In Irinjalakuda, he runs a Catholic resource center across the street from the diocese’s towering pink cathedral. He buzzes around the diocese on a motorcycle, often in his cassock, his cellphone ringing incessantly. He operates a suicide hot line (Kerala has one of the highest suicide rates in India), counsels couples, teaches courses in parenting and runs a program that mediates local conflicts.

He said he feels more vital here than he did in the United States or Europe, where he was needed only for the sacraments.

“In the other world, we are official priests,” he said. “We are satisfied just doing the Mass and sacraments, everything on time, everything perfect.

“In India, the people come close to us,” he continued. “The work satisfaction is different. Our ministry is so much wanted here.”

At the same time, the Catholic church in Irinjalakuda is expanding. When Bishop Pazhayattil was appointed in 1978, the diocese had 78 parishes; it now has 129. He said it was unlikely he would be so eager to send his priests to Europe or the United States in the future.

The rectors of both large seminaries in Aluva, with over 400 students each, each said in separate interviews that the Catholic church in the United States and Europe would eventually need to stop relying on India to supply priests.

“It is not a solution,” said Msgr. Bosco Puthur, the rector of St. Joseph Pontifical Seminary in Mangalapuzha. “It is only a stopgap that does not solve the problem.” New York Times