The Mother Teresa Stamp is Coming! 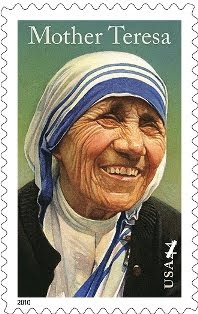 “The stamp will be dedicated September 5 [at] the Basilica of the National Shrine of the Immaculate Conception in Washington, DC. Feel free to post information about the stamp, the image and the dedication ceremony on your website. Thanks!”


Wow. Launching the stamp at a church. The anti-religion radicals are going to go wild!

When the stamp was first announced, a group called the Freedom from Religion Foundation began spreading lies about Blessed Mother Teresa, accusing this holy nun of having a ‘darker side,’ and calling her a ‘polarizing Roman Catholic figurehead.’

Mother Teresa gave a pro-life speech when she accepted the Nobel Peace Prize in 1979. This radical group called her speech a “disturbing, befrogged religious rant.”

That’s why we swung into action to “Stamp Out Bigotry!”

Thank you for signing our petition. It truly made a difference. If your friends or family would like to add their names in support of the Mother Teresa stamp and against those who attack this holy nun, tell them to visit www.stampoutbigotry.com.

Too often only one side of this debate is heard. This time the Post Office heard from us. A separate spokesperson for USPS even told a reporter that our efforts were appreciated.

You would think attacking Mother Teresa would be off limits. But in our world, respect and decency can be discarded so long as you're bashing Christianity. A small but vocal segment of our country will stop at nothing to cut down the role of religion in our public life.

These groups are relentless. So we must defeat them at every turn.

This past week, the anti-religion zealots were dealt another blow. They fought for years to tear down a cross at the Mojave War Memorial in California – a cross honoring our fallen heroes. We filed an important brief in this case with the Supreme Court on behalf of you – the members of CatholicVote.org – and we won.

Last week the Supreme Court ruled that a federal court went too far in ordering the removal of the cross (which has been covered up by a plywood box since 2002!).

CatholicVote.org is committed to protecting and promoting the role of religious faith in our culture and national life.

We think it’s proper and fitting that our Supreme Court has a statue of Moses. We think it’s great that three Catholic priests (one is now a Saint!) are honored in the National Statuary Hall located in the United States Capitol. This is the history of our nation. We should be celebrating the role of religion in America, not destroying it.

And that’s why we’ll be in Washington at the ceremony unveiling the Mother Teresa stamp on September 5.

Blessed Mother Teresa of Calcutta, pray for us.


P.S. Can you name the three priests who are honored in the National Statuary Hall? Click here to see if you are right.