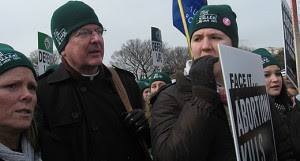 Archbishop John Nienstedt stands with Nancy Schulte, left, and Genevieve McCarthy, a senior at Providence Academy in Plymouth, during the rally on the National Mall before the march. Schulte works in the archdiocesan Office for Marriage, Family and Life, which organized the trip from the archdiocese.

It took a 26-hour bus ride, a student conference and a national march of more than 400,000 people for Nicholas Vance, 14, to realize the pro-life movement is more alive than he previously thought — much more alive.

“Before this, I thought, ‘Oh, wow, there’s only a couple of people I know who are pro-life,’” he said. “But when I see today, and see the hundreds of thousands of people who were walking with us and supporting life, I was just amazed that there are that many people who feel the same way — that abortion is wrong.”

Vance was sitting in the grass near the Library of Congress, the late afternoon sun backlighting the Capitol dome behind him. His coat was unzipped, despite the below-freezing temperatures. A parishioner from St. Joseph in West St. Paul, he was one of the 274 Catholics from the archdiocese who participated in the national March for Life in Washington, D.C., Jan. 24.

The annual march commemorates the Jan. 22 anniversary of Roe v. Wade, the U.S. Supreme Court decision that legalized abortion in all 50 states.

The march began with a noon rally on the National Mall where speakers, including members of Congress, urged marchers to support pro-life legislation. Marchers then walked along Constitution Avenue to the Supreme Court building holding signs while praying, singing and chanting pro-life slogans. 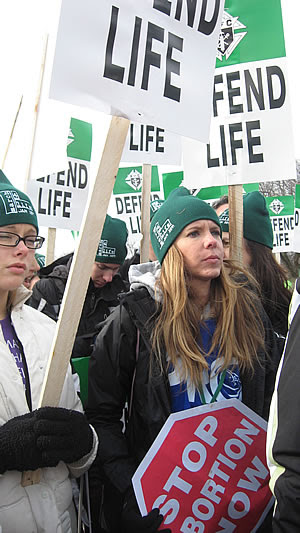 Andrea Gibbs, 29, youth minister at St. Wenceslaus in New Prague, holds a “stop abortion now” sign while standing with members of her parish during the rally. She is excited to see her youth passionate about protecting life, she said.

The March For Life organization estimates the 2011 event was the largest march ever, exceeding the estimated 400,000 participants who attended in 2010, said its president Nellie Gray.

The archdiocesan group included marchers from 17 parishes, four Catholic high schools, and Community of Christ the Redeemer, a Catholic lay group whose members attend various parishes. The archdiocesan Office of Marriage, Family and Life sponsored the trip. Archbishop John Nienstedt joined the group for the rally on the Mall.

The first March for Life began in 1974, one year after Roe v. Wade. It fashioned itself after the marches on Washington that united civil rights activists in the previous decade.

As the annual march’s crowd has grown in number, it has also grown younger.

Bryan Kemper, the founder and president of the pro-life organization Stand True Ministries, estimates that 70 percent of the marchers are young people today. Most of the participants from the archdiocese were high school students and their chaperones.

“Young people have a light in their soul that can be ignited in this kind of atmosphere,” said Mary Ann Porter, a parishioner at St. Henry in Monticello who accompanied her 16-year-old son, Luke. “This is about activism, which is in the heart of every young person.”

The day before the march, students attended a daylong student conference hosted by Students for Life of America, a national organization that supports campus pro-life groups. Although most of the attendees were college-aged, Afua Paintsil, 16, a junior at Benilde-St. Margaret’s School in St. Louis Park, was glad she was there.

“I’ve learned so much,” she said over lunch on Sunday, after hearing the first four speakers. 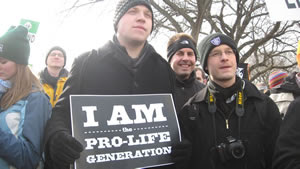 Seminarians Jon Freidhof, left, Colin Easton and Blake Rozier walk with a pro-life sign during the annual March for Life. Friedhof studies for the Diocese of La Crosse, Wis., Easton for the Diocese of Rockford, Ill., and Rozier for the Diocese of Duluth. They attended the march with other first-year theology students from St. Paul Seminary.

“I’m someone who learns well from being shocked, and I’ve been shocked a lot,” said Paintsil, who attends St. Mary of the Lake in Plymouth. “That’s how you have to teach our generation.”

She added: “We have a mindset that things aren’t a big deal; that it doesn’t concern me so I don’t have to worry about it. We are a pretty selfish generation.”

Yet, the conference drew 1,800 high school and college students, which may be the world’s largest pro-life student rally, SFLA executive director Kristan Hawkins told the crowd. Throughout the conference, speakers asked participants to stand up for the unborn children and mothers who have been affected by abortion. Students heard speakers who described the horror of abortion, the power of adoption, and what students can do to help save unborn children’s lives.

“We’ve been told that abortion is a complex question — it’s not,” Scott Klusendorf, president of the Colorado-based Life Training Institute, told the crowd. The only question that matters is, what is the unborn? If the answer is human — and science says it is — it’s wrong, he said.

Women do not undergo abortion by choice, Mike Schwartz, chief of staff to U.S. Senator Tom Coburn (R-Okla.) said in one of the afternoon breakout sessions. “Abortion is what happens when women run out of choices.” 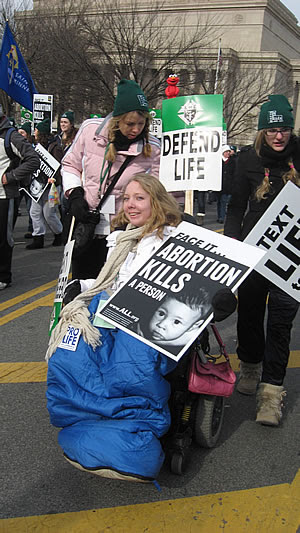 Aly May, 14, and her mother, Maren, head toward the annual March for Life after attending Mass at the Verizon Center. A member of?St. Jude of the Lake in Mahtomedi,?Aly is confined to a wheelchair because of a condition called spinal muscular atrophy. The Mays went to the march to remind others that being pro-life extends beyond protecting the unborn.

“You will make a great impression on the Mall. It makes a difference to legislators,” Lipinski told the students, speaking about the next day’s march. “The pro-life movement is not going away; it’s only getting stronger.”

Johnson left the abortion-providing organization in 2009, a year after receiving its employee of the year award. Johnson’s book describing her turn-of-heart, “Unplanned,” shot to the No. 8 bestseller on Amazon.com within 24 hours of its Jan. 15 release.

More than 4,000 abortions happen daily in the United States, Johnson, 30, told the students. “Who are we missing? Who’s not here because of abortion? Siblings? Cousins? Aunts? Uncles? Scientists? The first female president?” she asked.

Johnson urged students to speak out against abortion even though it can be unpopular.

“Guess what — your friends are having abortions,” she said. “They’ll never know they can reach out to you if you don’t reach out to them first.”

In Minnesota, 44 percent of abortions in 2009 were performed on women between the ages of 18 and 24, according to the Minnesota Department of Health. The statistics for 2010 have not yet been reported.

“Keep going. Keep fighting. We are going to be the ones who end abortion in this country,” Johnson said.

Attending Sunday’s conference inspired St. Wenceslaus in New Prague parishioner Steve Bohlke, 50, to make the decision to begin “sidewalk counseling,” or speaking to women entering a clinic for an abortion.

“It got my blood stirred up,” said Bohlke, who was a chaperone. Earlier in the day, he had heard speakers explain how to sidewalk counsel successfully, including what to say and what not to say, he added.

The conference also motivated St. Wenceslaus parishioner Mitch Gareis, 18, to be more passionate about the pro-life cause, and to be a leader, he said.

‘You will be the voice’

On Monday morning, the youth attended the annual Youth Concert and Mass for Life before heading to the march. Organizers split the event between two locations — the Verizon Center and the D.C. Armory — because it drew more than 27,000 thousand youth and adults, most of whom were Catholic. Members of the archdiocesan group worshiped at both sites.

Cardinal Donald Wuerl of Washington and Cardinal Daniel DiNardo of Galveston-Houston presided at the Masses. Cardinal Francis George of Chicago, four archbishops — including Archbishop Nienstedt — 16 bishops and more than 200 priests were among those who concelebrated Mass at the Verizon Center.

He reminded those gathered that it wasn’t enough to just overturn Roe v. Wade, but that “our mission is to change the whole culture of our country.”

After the Mass, marchers made their way to the National Mall, picking up prepared posters dropped in stacks along the blocked streets. In the sea of people, marchers from the archdiocese recognized each other by their dark green knit hats embroidered with “March 4 Life, Jan. 2011” as they followed a blue flag with the archdiocesan crest.

Others held homemade signs, including some that pointed to adoption as an alternative to abortion.

“Thanks Mommy 4 Choosing Adoption,” declared the sign held by Divine Mercy of Faribault parishioner Tricia Anderson, 15.
St. John the Baptist in New Brighton youth minister Libby Dupont held a sign with a picture of her own 5-month-old adopted daughter, Magdalene, next to the words “Adoption is the answer.”

Seminarian David Gockowski, 24, described the march as “beautiful chaos.” It was the second time he had attended the national march. “Everyone is here representing their community, their church,” he said. “You realize that this is a great cause, and it’s bigger than we are.”

Attending the march and accompanying pro-life events made St. Joseph parishioner Micah Zimmerman, 14, think of abortion as a “holocaust,” he said. “I knew it was killing, but not like that,” he said. “Now I feel like doing something about it.” Catholic Spirit

The Archbishop looks good - see how much more practical a stocking-cap is instead of a biretta or a beanie. JK