.
Tim Drake of St. Joseph, senior writer for the National Catholic Register [EWTN radio anchor and Catholic Defense League Board Member, Father, and Farmer, among other things], stands next to a poster for “Courageous” on Tuesday at Parkwood 18 in Waite Park. Drake covered the filming and became an extra on the set in the faith-based movie, which opens Friday. 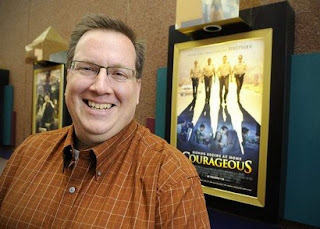 Tim Drake of St. Joseph, senior writer for the National Catholic Register, stands next to a poster for “Courageous” on Tuesday at Parkwood 18 in Waite Park. Drake covered the filming and became an extra on the set in the faith-based movie, which opens Friday. / Jason Wachter, Tim Drake doesn’t have an agent, an entourage or an endorsement deal.

What the St. Joseph resident does have is a bit part as an extra in “Courageous,” a faith-based movie about fatherhood in theaters starting Friday.

“This film was produced by Sherwood Pictures, an outgrowth of Sherwood Baptist Church,” said Drake, a senior writer for the National Catholic Register.

“Courageous” will be the fourth film to be released by the megachurch’s 3,000 members. The “action-packed police drama” is rated PG-13 and features Alex Kendrick, an associate pastor who also directed and co-wrote the movie.

“That’s something that has inspired other groups and other churches to do likewise,” said Drake, who was on the set during filming in 2010. “It’s an interesting phenomenon.”

Movie theaters and religion may seem like an odd combination to some, but Solid Rock Family Church has been holding weekly services at Parkwood 18 in Waite Park for almost a year.

“Movie theaters, in some ways, are like the churches of the modern world, so why not use that media to try to reach the younger generation with positive messages?” said Drake, who was at last month’s premiere of “Courageous” in Atlanta.

“I definitely think the topic of fatherhood is worth exploring,” Drake said. “If we look culturally, there are a lot of absent fathers in families, so the fact that this film is taking a look at that topic is very timely.”

Ben Reiners is the general manager of Parkwood 18. He said his theater has been fielding calls for more than a month about the movie, which was made for an estimated $1 million and stars relative unknowns.

“What we play is determined by our corporate office, and we thought it would be a good film to play in the St. Cloud area,” Reiners said of the Marcus Theatres-owned venue.