Another "late vocation" starts with Mass in childhood church; God is good!

.
As a kid, growing up in Janesville, Matt Fasnacht spent an hour just about every Sunday in beautiful St. Ann’s Catholic Church.

How fitting it was, then, that the first Mass he presided over as a priest was celebrated yesterday at his hometown church. 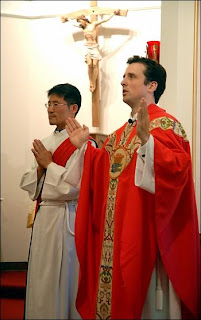 Fasnacht “Mass of Thanksgiving” — a new priest’s first Mass — took place Sunday under a perfect blue spring sky in Janesville. With several hundred well-wishers packed in pews and overflowing to the church entryway, Fasnacht’s career of celebrating mass began in the same building his religious life did decades ago.

“It was a great joy,” he said afterward. “It was very overwhelming. I’m just very thankful to God.”


While no two journey’s to a life of religion are alike, Fasnacht’s must certainly be among the more unique. He tells it like this:

After attending church regularly as a kid, his interest in the Catholic mass went the way of most teenaged boys — out the window. While he didn’t entirely abandon his faith, he certainly paid less attention to it than other aspects of his life.

He says he was living what he calls a secular life until, in his early 20s, a series of events occurred that drove him to his current occupation. He recalls being 23 years old when he began to feel an emptiness inside. He noticed it affecting him in subtle ways.

Slowly, he began wondering about God and whether turning back to his faith would help him get rid of the emptiness he felt inside. The feeling grew stronger — almost unexplainably intense — and he decided to follow it. He began to attend church regularly again. He returned to the Bible. He prayed. He woke up one day to the feeling of a spirit-like presence all around him. He wept, certain that it was God calling to him.

Then, on an April Sunday several years ago, he was attending Mass at St. Mary’s Basilica in Minneapolis when a similar but much more intense feeling overcame him. He sobbed uncontrollably until he says God communicated to him the message that prayer is powerful.

He enrolled in a seminary. The rest is history. He was ordained Saturday in Winona. And on Sunday, he became a practicing priest.

Fasnacht’s ordination is the Winona Diocese’s only one this year.

“Over the past several years, we have not had as many vocations to the priesthood,” said Rose Hammes, a spokeswoman for the Winona Diocese. “But the numbers are growing. It’s cyclical. There’s a lot of young men very much affected by (former Pope) John Paul II.”

Marny Fasnacht, Matt’s mom, attended Saturday’s ordination and was seated in the front row of St. Ann’s to watch her son run the show. Even his grandparents, Jack and Peggy Sexton, formerly of Mankato, flew in from New Mexico for the event.

“He’s fired up for the Lord,” Marny Fasnacht said. “We’re very proud of him. Couldn’t be prouder.”

She was also proud of another son who made news in Janesville, although itwasn’t the kind of news anyone wants to be the center of. On her wrist was a black bracelet bearing the name of Lt. Michael Fasnacht, who was killed in Iraq on June 8, 2005.

The back of the program for Sunday’s Mass read: “This Mass was offered for 1st Lt. Michael J. Fasnacht out of love
and devotion.” Mankato Free Press
--

Matt Fasnacht was studying to be a Roman Catholic priest when his older brother Michael, an Army Ranger, was killed by a roadside bomb in Iraq in 2005. Instead of causing him to question his faith, the loss renewed his determination to enter the priesthood.

"It's so painful and harsh. You either run from it, or you trust in God even more," says Fasnacht, 32. "I became closer to God." USA Today

Now lets hope and pray this good priest does not get burned out working 3 or 4 parishes in our Winona diocese. We have one of the worst priest shortages in the nation.

I was at the ordination. It was very touching, very sweet.

And supposedly we have five to be ordained next year, Sanctus Belle....

OK, where are you in the diocese of Winona anyway?
(I'm actually in...Winona.)

Ray, where did this article and pic come from?