Battle of the St Paul Centennials 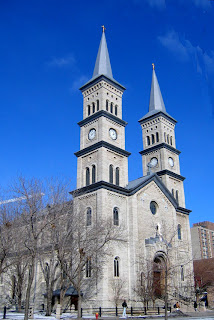 .
The electrons were hardly dry when I posted on the St Paul Cathedral's Centennial celebration which begins next Sunday when all of a sudden, news of the Assumption Parish's Sesquicentennial (That's a "Centennial-and-a-half") hit the monitor, also beginning next weekend. For those familiar with Catholic history, it is not surprising that the Germans didn't like going to Irish churches, and vice versa; so when Archbishop Ireland (sic) build his two mammoth structures as "co-cathedrals" in St Paul and Minneapolis, the Germans probably just poured more money in their parish, which predates both of them by 50 years.

The Irish have taken over Assumption Catholic Church, which once was known as the German Cathedral.

But there remain a substantial number of families in the congregation with German roots. So, for festivals, the church's heritage often is honored with brats and beer in the parking lot.

"The Irish will put up with the brats as long as there's beer," Malone said, laughing.

This will be a brat-filled summer at the church where German was spoken until World War I, when the language became too politically volatile to be acceptable.

Beginning next Sunday, Assumption will be celebrating its 150th anniversary.
[...Snip]
German immigrants built the first Assumption at what is now 51 W. 7th St. in 1857. Construction on the current two-spire building, built from the same plans as the Ludwigskirche in Munich, began in 1871. That means it's older than the State Capitol (1905), the Cathedral (1907) and the St. Mary's Basilica in Minneapolis (1914).

"The oldest landmark in the Twin Cities," Malone points out. [....Snip] StarTribune

I won't quibble with the definition of the word "landmark" with Father Malone as one can make a case that the Missisisippi River and maybe even "Pilot Knob" could be considered to be "landmarks" but the current extent of the "TwinCities" has expanded far beyond it first two urban burgs.

So the good parishioners of St Peter's parish in Mendota, founded as a French church in 1840, might like to point out that the construction of it's historic stone church began in 1853, four years before Assumption in St Paul. It is still used today.