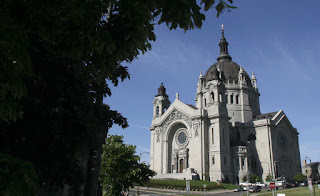 1851 The log chapel becomes the first Cathedral of St. Paul after arrival of Bishop Joseph Cretin.

1858 First mass is celebrated at the third cathedral.

1907 Cornerstone is laid for the new cathedral.

1915 Ireland celebrates the first mass in the new cathedral, before congregation of 2,500.

1958 With interior work essentially complete, the cathedral is consecrated by Archbishop William Brady.

2002 A new cross is installed on the cathedral dome, marking the end of the restoration project.
StarTribune

The Story of the Cathedral of St Paul