St Peter Claver Parish hatches a nest of Eagles (Scouts, that is) 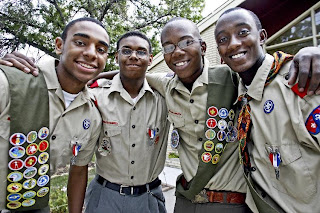 Ten years ago, Bill Butchee led his fledgling Boy Scout troop on a camping trip and ran into a more established troop.

"They asked us how many Eagle Scouts we had, and I said none," he recalled. But he and the other scout leaders had a vision that, one day, their St. Paul troop would produce an Eagle Scout.

Little did he know that the troop would go on to turn out a bumper crop.

Seven members of Troop 96, sponsored by St. Peter Claver Catholic Church, have become Eagle Scouts this year -- a rarity. The accomplishment is impressive given that only about 4 percent of scouts become Eagles, said Kent York, a spokesman for the Boy Scouts of America's Northern Star Council.

The new Eagles from Troop 96 also represent the most African-American scouts in a single troop from the council, which serves the Greater Twin Cities area and western Wisconsin, to attain scouting's highest rank in the same year.

The local milestone comes at a time when the Boy Scouts of America is doubling efforts to involve more kids of color in scouting. "When people think of scouting, they think of the stereotypical white, middle-class boy out in the woods," York said. It's an image the nearly-100-year-old organization is fighting to change as it tries to stay relevant to today's diverse youth.

In Maryland, the Baltimore-area Boy Scouts council has partnered with the local NAACP to recruit more scouts. In Houston and elsewhere, the scouts have started troops in which all members are from the same ethnic group.

Eric Moore, a spokesman for the Boy Scouts of America, said there are many reasons why there aren't more African-Americans involved in scouting.

"There are other types of programs and activities out there that compete for attention with youth today," he said. "Research tells us that particularly in the African-American community, the youth lean toward more sports-oriented things that are competitive in nature."

In the beginning, Troop 96 leaders had to fight the perception that scouting is a white thing.

"A lot of times African-American young men think that scouting is a white man's club," said Butchee, who retired as scoutmaster last year. "We thoroughly eradicated that and said no, not really. It's an organization for all boys."

Butchee, who was a scout himself in the 1950s, said he helped re-start the troop in 1994 because he wanted his sons to learn the same skills and values he did from scouting.

His two sons, now grown, were part of the first wave of Eagle Scouts from Troop 96. In all, the troop has produced 10 Eagles.

The first three earned their Eagle Scout badges between 2003 and 2005, Butchee said.

"We knew that we were making history and we knew it was something special from the start," said Butchee, who has known the seven Eagles since they first started in scouts.

Scouts are eligible for the Eagle Scout badge until they turn 18. They must earn 21 merit badges, including 12 required ones.

The Eagles from Troop 96 relied on one another for motivation, Butchee said. "They were together for that whole run," he said. "They kind of pushed each other. It became like a challenge for each one."

Working for his merit badges gave Jacob Schwartz, 16, skills that he says he'll use the rest of his life. Through Scouts, he learned how to balance a checkbook and manage his money, and how to stay physically fit. And the classes he took to earn his citizenship badges taught him how the government works and his role in the community.

Sometimes, says Schwartz, it's hard for him to believe his scouting days are over.

The camping trips to Wisconsin, where he played football with his buddies and cooked barbecue chicken and vegetable "foil dinners" over an open flame, are among his fondest memories. "I just never had an experience being with a group of guys as close-knit for so many years," he said.

Though they go to different schools and live in different cities, the 2008 Eagles say they're as close as brothers. Four of them gathered recently at the church, greeting each other warmly and wasting no time in starting up a conversation. "The only reason I stayed through it was because of all these guys," Ndayizeye, 18, said.

Now that they've reached their goal, the friends are setting their sights on the next hurdle.

Said Williams: "What's stopping me from starting my own troop?"

StarTribune Comments: Congratulations guys. You are part of a very small fraternity and you have shown the world that you have what it takes to be an exceptional citizen. From a fellow Eagle Scout - got mine in May of 1967 at age 14. I'm very proud of each one of you.

The last time I recall the statistics - one out of one hundred boys will join scouting. From that number - one out of one hundred will make it to Eagle. I'm not certain how close those stats are to reality - I do know that it takes substantial effort and dedication. This accomplishment will only gain in importance as you continue on your journey into adulthood. Congratulations men! Well done. I received my Eagle in 1982 and it means more to me today than it did when I received it over twenty years ago!

people are still impressed when they find it out. Congratulations and you'll do well in life because of what you learned become an Eagle Scout.

Congratulations to Father Kevin McDonough and the parishioners of St. Peter Claver parish for supporting these fine young men in their efforts to attain the rank of Eagle.

I only made it to Second Class. I wasn't much of a swimmer, but I was pretty good at tieing knots
Posted by Unknown at 7:34 AM