Vatican Splendors is Open; As close as you will ever be to Pope John Paul II 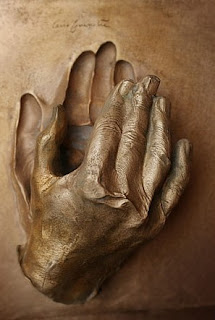 Minnesotans have a chance to see more than 200 treasures from the Vatican in Rome. The exhibition, on display at the Minnesota History Center in St. Paul, is called "Vatican Splendors." It includes rare items which have never before left Rome, and a few which have never been publicly displayed.

Each of the Vatican treasures on display has a story behind it.

In 1804 Napoleon Bonaparte gave a papal tiara -- a sort of crown -- to Pope Pius VII as a gift. The tiara was studded in jewels, including a huge emerald.

Bust of an angel

But as soon as the pope saw it, he knew it was not a gift but an insult. The tiara was made for a head much smaller than the pope's. It also weighed 18 pounds, so even if he attempted to wear it, he would likely injure his neck.

Exhibition coordinator Mark Greenberg says that's not the worst of it.

Napoleon's "re-gift" is just one of the many luxurious and storied pieces on display at the Minnesota History Center.

Greenberg, whose company, Evergreen Exhibitions, worked with the Vatican to create this show, says the Catholic Church was the greatest patron of the arts for centuries.

"Much of the great art which exists today would not exist if it wasn't for the Vatican's support," said Greenberg. "They are home to one of the most well attended famous museums, the Vatican museum, which houses artworks by Michelangelo, Caravaggio, Rafael."

Among the items on display in this exhibition are tools Michelangelo used to paint the ceiling of the Sistine Chapel, and the smoke cannister used to signal the election of Pope Benedict a couple of years ago.

There are paintings and sculptures, weapons and uniforms from the Vatican's Swiss Guard, Chinese silk scrolls and African carvings. Some of the works were commissioned by the Vatican, others were gifts to various popes.

"A number of years ago we had the opportunity to take an exhibition from the Smithsonian on the presidency, and the response to that was phenomenal," said Spock. "Like a bolt from the blue, we suddenly realized -- well of course Minnesotans are interested in national history and they're interested in world history."

The exhibition is making only three stops in the United States before it returns to Rome. By Vatican law, the items cannot spend more than a year away from home.

St. Paul is the third and final stop on the tour -- the others were St. Petersburg, Fla., and Cleveland, Ohio.

Accompanying the exhibition is Monsignor Roberto Zagnoli, curator of the Vatican Museum. Zagnoli says the Vatican continues to be a patron of the arts, but now, more so through its many dioceses around the world.

Zagnoli says the St. Paul Cathedral, just steps away from the Minnesota History Center, is a great example of a church that continues to promote the arts, commissioning works by painters and sculptors.

One item that's likely to be among the most popular on display in the Vatican Splendors exhibition is a bronze cast of one of Pope John Paul II's hands. It's the one item that people are free to touch.

Monsignor Zagnoli says Pope John Paul liked the idea that by making the cast, whomever came to visit the exhibition would be able to shake his hand, even after he was gone. Minnesota Public Radio

The Catholic Spirit article on the Vatican Splendors Exhibit