Wonderful Archaeological Find in Megiddo in Israel; Proof that Jesus was worshipped as God as early as 230 A.D. (C.E. to you non-believers) 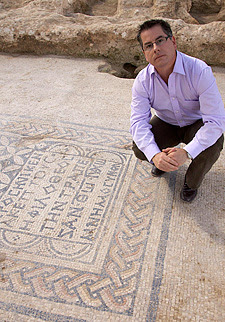 Dr John Dickson, the series’ host and co-founder of the Centre for Public Christianity, will guide viewers through the remains of an ancient prayer hall unearthed at Megiddo in central Israel.

“The inscriptions on the mosaic floor are remarkable,” Dr Dickson says.

“One of them names a benefactor called Gaianus who is described as a centurion. Another mentions a woman called Akeptous who ‘…offered this table in memorial of the God Jesus Christ’.”

The inscriptions cast more doubt on claims made by prominent atheists and popular authors that Jesus’ divinity was an invention by the fourth century church.

“Here is extraordinary physical evidence from the century before Constantine and the Council of Nicaea that Christians, including Roman officials, were worshipping Jesus as divine,” Dr Dickson explains.

The Life of Jesus team is only the second camera crew to be granted access to the excavation of what is likely to be the earliest Christian church ever found.

Access has been difficult to obtain because the mosaics were discovered within the grounds of a maximum security prison built to contain Israel’s most dangerous offenders.

Lead archaeologist Yotam Tepper from the Israeli Antiquities Authority has dated the mosaic floor to AD 230 but he admits he is being deliberately conservative.

“Tepper is confident of the date and told me there is evidence it might be even earlier, late second century,” Dr Dickson says.

Other parts of the dig demonstrate the revolutionary nature of Christianity’s early years.

The evidence indicates that this prayer hall served a gentile congregation, showing just how quickly the Christian faith moved from becoming a Jewish sect to a truly international faith.

“Other inscriptions underline something else we already see in the New Testament,” Dr Dickson notes. “Women were prominent benefactors of early Christianity.”

Dr Dickson says the remains of the Christian prayer hall were a highlight of this leg of The Life of Jesus production.

“It was amazing to stand in the very spot where centuries earlier my brothers and sisters had gathered in the name of ‘the God Jesus Christ’!” he says.

“Could they ever have imagined just how far and wide the same Jesus would be worshipped?”

The Life of Jesus series is a joint production by the Centre for Public Christianity and Anglican Media Sydney, following in the footsteps of the highly successful The Christ Files.

It is due to air on Australian television in April 2009 and will be released on DVD shortly after. SydneyAnglicans.net