The future of the American Catholic Church may not be Hispanic; It may be Vietnamese 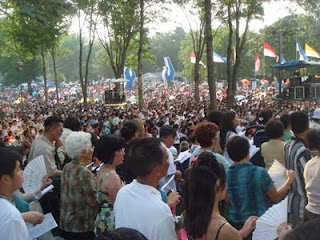 .
It never gets anywhere near the coverage it merits, but the Stateside church's largest annual pilgrimage took flight again earlier this month as, for yet another August weekend, the 33rd Marian Days (above) lived up to its legend as roughly 80,000 Vietnamese-American Catholics swelled Carthage, Missouri (usual pop. 15,000) for the latest edition of the festival started in 1978 by a recently-migrated religious community which, having received a former seminary in the Heartland as its new home-base, sought to give thanks for the freedom it found on these shores.

For the better part of five days, young and old alike sleeping in tents throughout, the Days see the US church's widely-dispersed, intensely-devoted Vietnamese diaspora gather from all points for a long weekend marked by everything from reunions to food-fairs to concerts... and, above all, the rites of faith. . . . Rocco from Whispers
Posted by Unknown at 9:44 AM