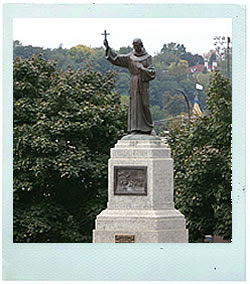 Stop near the front steps of the Basilica of St. Mary for a good look at a copper statue of Father Louis Hennepin, a Belgian missionary priest and explorer credited with naming St. Anthony Falls. He found himself in Minnesota after Sioux American Indians captured him and and took him up the Mississippi River. The Knights of Columbus dedicated this statue in 1930, honoring the 250th anniversary of the Franciscan priest christening the falls, which can be viewed from downtown Minneapolis.

Did you know? Father Hennepin’s fame spreads across the northern U.S-Canada border, and he is credited with “discovering” Niagara Falls. The Belgian-style Ommegang Brewery in upstate New York even named a saison ale after him. Catholic Spirit
Posted by Unknown at 6:37 PM