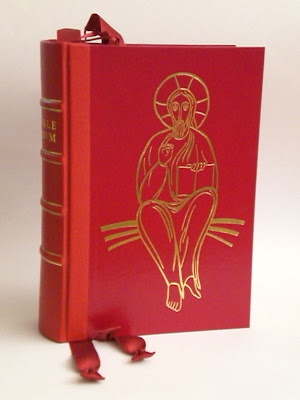 You can better believe that there will be lots of sneak previews all over the country on this one. And the complaints of people not sticking to the Ordinary Form General Instructions of the Roman Missal (the GIRM) will be coming from those improvisers and extemporizers who have been wreaking havoc on the GIRM for 40 years.


To the surprise of no one, the following announcement is fresh from the Mothership:

Cardinal Francis George, OMI, Archbishop of Chicago and President of the United States Conference of Catholic Bishops (USCCB), has announced that the full text of the English-language translation of the Roman Missal, Third Edition, has been issued for the dioceses of the United States of America.

The text was approved by the Vatican, and the approval was accompanied by a June 23 letter from Cardinal Llovera Antonio Cañizares, Prefect of the Congregation for Divine Worship and the Discipline of the Sacraments. The Congregation also provided guidelines for publication.

In addition, on July 24, the Vatican gave approval for several adaptations, including additional prayers for the Penitential Act at Mass and the Renewal of Baptismal Promises on Easter Sunday. Also approved are texts of prayers for feasts specific to the United States such as Thanksgiving, Independence Day and the observances of feasts for saints such as Damien of Molokai, Katharine Drexel, and Elizabeth Ann Seton. The Vatican also approved the Mass for Giving Thanks to God for the Gift of Human Life, which can be celebrated on January 22.

The date of implementation was chosen to allow publishers time to prepare texts and parishes and dioceses to educate parishioners.

“We can now move forward and continue with our important catechetical efforts as we prepare the text for publication,” Cardinal George said.

In the coming weeks, staff of the bishops’ Secretariat of Divine Worship will prepare the text for publication and collaborate with the staff of the International Commission on English in the Liturgy (ICEL), which will assist Bishops’ Conferences in bringing the text to publication. In particular, ICEL has been preparing the chant settings of the texts of the Missal for use in the celebration of the Mass. Once all necessary elements have been incorporated into the text and the preliminary layout is complete, the final text will go to the publishers to produce the ritual text, catechetical resources and participation aids for use in the Liturgy.

Receipt of the text marks the start of proximate preparation for Roman Missal implementation. Before first use of the new text in Advent 2011, pastors are urged to use resources available to prepare parishioners. Some already have been in use; others are being released now. They include the Parish Guide for the Implementation of the Roman Missal, Third Edition, and Become One Body, One Spirit in Christ, a multi-media DVD resource produced by ICEL in collaboration with English-language Conferences of Bishops. Both will be available from the USCCB. Information on resources can be found at www.usccb.org/romanmissal

Bishop Arthur Serratelli of Paterson, New Jersey, Chair of the Bishops’ Committee on Divine Worship, voiced gratitude for the approval.

“I am happy that after years of preparation, we now have a text that, when introduced late next year, will enable the ongoing renewal of the celebration of the Sacred Liturgy in our parishes,” he said. Msgr. Anthony Sherman, Director of the Secretariat for Divine Worship of the USCCB noted, “A great effort to produce the new Roman Missal for the United States, along with the other necessary resources, has begun. Even as that work is underway a full–scale catechesis about the Liturgy and the new Roman Missal should be taking place in parishes, so that when the time comes, everyone will be ready.” Whispers in the Loggia