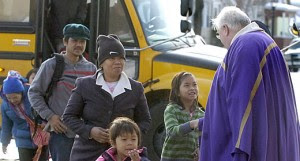 Father Mike Anderson greets refugees from the Myanmar state of Karenni as they get off a school bus to attend Mass at St. Bernard in St. Paul Nov. 28. The parish has arranged for transportation for nearly 400 Myanmar refugees that have started coming to Mass recently.

Father Mike Anderson waited patiently on the front steps of St. Bernard in St. Paul last Sunday morning, his purple vest­ments cloaking him from the Novem­ber chill. Clanging church bells heralded the 10:30 Mass, but only a smattering of parishioners prayed silently in the pews.

Minutes later, a yellow school bus pulled up to the curb, then another one behind it. The priest’s face lit up as he greeted dozens of people pouring off the buses into the church.

About 400 Myanmar refugees have found a spiritual home at St. Bernard in recent months. For Father Anderson, the refugees’ arrival has been nothing short of a miracle, he said.

“I think it’s the best thing that could have happened to us,” Father Anderson told The Catholic Spirit. “For 15 years, we’ve watched our parish rolls drop from 1,000 families to less than 400 families.

Come one, come all

It all started a little over a year ago when one Catholic family from the Myanmar state of Karenni heard church bells ringing in the distance. The family members followed the sound to St. Bernard, where they began attending Mass regularly.

Without hesitation, Father Anderson offered to drive the grateful couple to church in his Ford Taurus. Soon he began picking up other Myanmar refugees along the way.

“Every Sunday they’d lead me to another person and another person, and pretty soon I brought like eight families to church one Sunday. They were sitting on each others’ laps,” Father Anderson said with a laugh.

At a parishioner’s suggestion, Father Anderson decided to contract with a bus company to transport people to church. “I didn’t know how many people would come,” Father Anderson said, “but within two weeks we had 125 Karenni joining us every Sunday for Mass.”

Since then, the refugee population at the parish has continued to grow. As word spread that St. Bernard was welcoming the Karenni, refugees from Karen, another Myanmar state with its own language and cultural identity, also began attending Mass there.

Some families have come from as far away as Texas to join what they heard was a Catholic church that would welcome them, Father Anderson said.

While the refugees have been a tremendous blessing for St. Bernard, making the parish a welcoming environment for them has presented some challenges, Father Anderson admitted. Read the balance at the Catholic Spirit