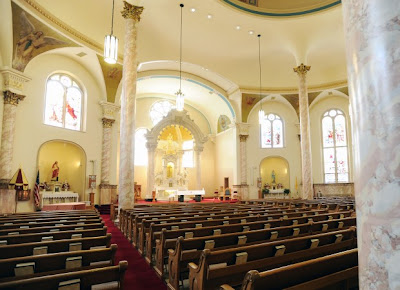 The Mass of Elevation for the Basilica of St. Stanislaus Kostka is today, Sunday, Sept. 9, 2012, in Winona. The original church was built in 1895. Winona Daily News)

Today the parish church built with the nickels, dimes and faith of lumber workers and packing house men becomes one of the pope’s very own.
Long known locally as the Polish Cathedral, for more than a century, the Basilica of Saint Stanislaus Kostka has stood as testimony in brick and stone to the faith and pride of the Polish immigrants to Winona, and of their children and grandchildren.
These were the people Cardinal John Krol — the first Polish-American priest to become a cardinal — spoke of when he addressed the Winona Polish Heritage Society in 1978: “The Polish people have an independent spirit. ... The Polish people are long suffering. ... They have been instrumental in handing down their Polish heritage — traditionally God first and then country, not forgetting their roots.
“We have inherited this culture.”
God first. The two things an immigrant Pole looked for when he arrived in his new home was a job and a Catholic Church. The first Poles to arrive in Winona sought a spiritual home at St. Joseph’s Church. St. Joseph’s was a German parish, and, as most of the Polish immigrants to Winona were Kashubian, a region of Poland that had been incorporated into Prussia, most also spoke German — although the sounds of the German language, rather than making them feel at home, was a reminder of an often painful past.
In 1871, the Rev. Alois Plut,
pastor of St. Joseph’s, helped his Polish parishioners organize a new parish of their own. About 100 families made up the new parish — designated by the Vatican as a national church for Polish-speaking Catholics. They raised $350 to buy two lots at the corner of Fourth and Carimona streets, and then raised $950 more to build a simple, wood-frame church. The church was completed in September 1872 and incorporated as the Church of Saint Stanislaus Kostka — though a shortage of Polish-speaking priests meant they would wait until 1873, and the arrival of Rev. Joseph Juszkiewicz, for St. Stan’s to have its first resident pastor.
Over the next 20 years the Polish community grew, filling and overfilling the church, forcing a decision on the part of the community — split into two parishes or build a new church big enough to hold them all.
They chose to build, and the Basilica of Saint Stanislaus Kostka is the result.
“They wanted to make a statement with this church,” the Rev. Robert Meyer said during St. Stan’s centennial celebration. “They came from beautiful European structures, and they wanted something that reminded them of home.”
But in Europe, the great and beautiful churches were built by the fortunes of counts, dukes and barons. In Winona, it was the sacrifice and dedication of the parishioners that raised the $85,000 — the equivalent of $2.2 million today — to pay for a church of their own. Four thousand people stood in the rain to watch Bishop Cotter bless the cornerstone, and even more crowded the streets and filled the pews for the dedication just a year later — appropriately enough, Thanksgiving Day, 1895.
Seating 1,800, with more than 17,000 square feet of floor space, St. Stan’s challenged the bluffs for domination of the Winona skyline — its brilliant white dome, topped by a 13-foot-tall statue of its patron, rising 172 feet above the street.
“It’s probably one of the best known churches in the Midwest and certainly among the most beautiful,” Meyer said, from his 100-year vantage point, “You can no longer put a price on it.”
Still, a church, however priceless, is not meant to be a museum but the spiritual home for the people it serves, and like any home, its décor and furnishings change with the time — and not always by choice.
On June 5, 1966, a bolt of lighting struck the dome. Fire did extensive damage to the dome, and the force of the bolt shattered two of the supporting pillars and smoke and water ravaged the interior. Disaster was met with resolve, and just six months later, on Dec. 11, Mass was again celebrated at the altar.
The Rev. Thomas Hargesheimer, rector of the basilica, sees a dynamic and growing parish with deep roots in its community.
“We have a lot more kids now,” he said. The surrounding neighborhood and the city as a whole is changing, bringing new people into the parish and the community. “We’re more diverse throughout the city,” he said, “and the parish has gotten larger and younger.”
Still, pride in being Polish is deeply rooted in the people of St. Stan’s. Many of the family names have been on the parish roster for well over a century.
“That pride is kept alive,” Hargesheimer said, “about the history … about the heritage … that we’re Polish.”

Who was St. Stanislaus Kostka?

St. Stanislaus was a defiant, rebellious teen who qualified for sainthood before his 19th birthday. Stanislaus was born to a noble Polish family in 1550, the second son of Jan Kostka, lord of Zakroczym in east central Poland.

Stanislaus was an exceptionally studious, pious lad. Sent to the Jesuit college in Vienna at 14, he was led by visions to attempt to enter the Jesuit order — a decision strongly opposed by his father. Determined and unbowed, Stanislaus persisted, eventually finding his way to Rome, where he was accepted as a novice by the Jesuit superior general. However, barely 10 months into his novitiate, Stanislaus sickened and died Aug. 15, 1568 — the Feast of the Assumption of Mary. 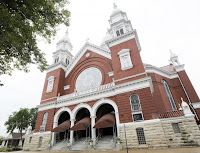