Father John Ireland and the Fifth Minnesota in the Civil War 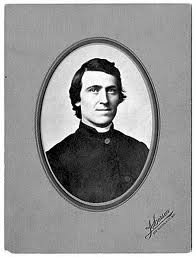 One of the titans of the Catholic Church in the Nineteenth Century in the United States was Archbishop John Ireland, the first Archbishop of Saint Paul, Minnesota.  Future blog posts will cover his career as Archbishop.  This blog post is focused on his service during the Civil War.  Ordained a priest only a year, Father John Ireland at 24 in 1862 received permission of his bishop to join the Fifth Minnesota Volunteer Infantry.  He joined the regiment immediately after the battle of Shiloh.
At the battle of Corinth on October 4, 1862 the Fifth Minnesota saved the day for the Union with a charge that stopped a Confederate breakthrough of the Union lines.  Running short on ammunition, the troops received additional cartridges from Chaplain Ireland who ran down the line dispensing ammunition.  When the fighting was over, the soldiers noted that their chaplain tirelessly tended the wounded and administered the Last Rites to soldiers whose wounds were beyond human aid.
The troops were very fond of their young priest and built him a portable altar from saplings.  His sermons were popular with the men, being direct, blunt and brief.  He was noted for his sunny disposition, quick wit  and his courage.  He was also an enthusiastic chess player, and would take on all comers in the evenings in camp.
Before battles he would hear the confessions of huge numbers of soldiers, with some Protestant soldiers often asking for admission to the Church.  He was always ready to pray with any soldiers no matter their religion, and give them what comfort he could in reminding them that God was ever at their side during their time of peril.  On one occasion he went to the side of an officer who had been shot and was bleeding to death and had asked for a chaplain.   the Archbishop recalled the scene decades after the War.   ‘Speak to me,’ he said, ‘of Jesus.’ He had been baptized — there was no time to talk of Church. I talked of the Savior, and of sorrow for sin. The memory of that scene has never been effaced from my mind. I have not doubted the salvation of that soul.”

Father Ireland was mustered out of service in March of 1863 due to ill-health, but he never forgot his time in the Union Army.  He was ever active in the Grand Army of the Republic, the Union veterans’ organization,   and would write about his experiences as a combat chaplain.  Unlike most Catholics of his day, he was a firm Republican, the friend of Republican presidents including McKinley and Roosevelt, and never forgot why the Civil War had to be fought, as this statement by him regarding the rights of blacks indicates:

There is but one solution of the problem, and it is to obliterate absolutely all color line. Open up to the Negro as to the white man, the political offices of the country, making but one test, that of mental and moral fitness. Throw down at once the barriers which close out the Negro merely on account of his color from hotel, theater, and railway carriage. Meet your Negro brother as your equal at banquets and in social gatherings. Give him, in one word, and in full meaning of the terms, equal rights and equal privileges, political, civil, and social. I know no color line, I will acknowledge none. The time is not distant when Americans and Christians will wonder that there ever was a race prejudice.
In his old age, Archbishop Ireland, after a life marked with many accomplishments, looked back upon his time as a chaplain with the Fifth Minnesota as the most fruitful part of his ministry.  In 1894 he gave a speech on patriotism to Union veterans.  This section of his speech I think is just as relevant today as when he gave it:
There is a danger  and a most serious one  in corrupt morals. A people without good morals is incapable of self-government. At the basis of the proper exercise of the suffrage lie unselfishness and the spirit of sacrifice. A corrupt man is selfish ; an appeal to duty finds no response in his conscience ; he is incapable of the high- mindedness and generous acts which are the elements of patriotism ; he is ready to sell the country for pelf or pleasure. Patriotism takes alarm at the spread of intemperance, lasciviousness, dishonesty, perjury; for country’s sake it should arm against those dire evils all the country’s forces, its legislatures, its courts, and, above all else, public opinion. Materialism and the denial of a living, supreme God annihilate conscience, and break down the barriers to sensuality ; they sow broadcast the seeds of moral death : they are fatal to liberty and social order. A people without a belief in God and a future life of the soul will not remain a free people. The age of the democracy must, for its own protection, be an age of religion.
Posted by Unknown at 8:41 AM