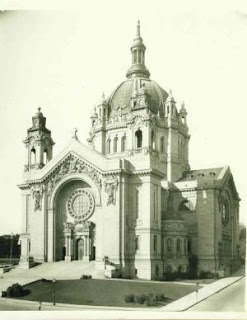 .
This photo shows the Cathedral exterior, with granite facade over the front doors, completed in 1914.  All photos are courtesy of the Cathedral of St. Paul Archives. As the first walls of the Cathedral [and now also National Shrine] of St. Paul began to form more than 100 years ago, church leaders envisioned a grand building that would define St. Paul. But money dried up before they could put on a dome.

On Sept. 19, 1912, more than 40 civic leaders -- of all faiths -- sat for lunch at the St. Paul Hotel. By the end of the meal, the state's biggest movers and shakers decided to pay for the dome themselves, said Eric Hansen, who wrote the biography of the Cathedral of St. Paul.

On Friday, Sept. 28, the Cathedral Heritage Foundation will gather at the same hotel to celebrate the historic landmark, and to raise money for its upkeep. The foundation owes more than $6 million for its renovation, said cathedral rector, the Rev. John Ubel. At Friday's gala, they hope to recapture the civic fortitude that built the church.

Those gathered at that meeting in 1912 in many ways built St. Paul, including Louis Hill, the son of railroad baron James J. Hill, and bank owner Otto Bremer. They wanted to see Archbishop John Ireland's vision for the cathedral completed. But efforts to raise money were falling short, Hansen said.

Coined the Bremer meeting, the gathering included members of the Cathedral's executive building committee. Otto Bremer was the first to get up and enthusiastically say it was up to them to raise the money, Hansen said. "What was merely supposed to be a discussion got everybody so enthused that they began to make pledges," Hansen said. They raised $100,000, the amount to pay for the dome. That amount would be about $2.33 million today, according to several inflation calculators.

"I've never seen a city like St. Paul, that has such affection with the people," Hansen said. "This building was more than just a Catholic shrine. It was for all people, a symbol of all races and nations."

Every donation from $1 to $1,000 was recorded in a book that is available to the public to see, said Celeste Raspanti, cathedral archivist. "I've seen the name of my great-grandfather who gave $25 in the book," Ubel said.

His hope is to pay off the renovation debt before the cathedral turns 100 in 2015. Friday's gala is sold out, with 275 people expected, Ubel said.

The church is still paying off the $35 million restoration of its signature dome done in 2000-2002. And a number of other projects remain, such as interior repairs caused by previous leaks. "There's a whole list of things that could be done," Ubel said. "Right now, my primary goal is to finish paying for what's already been done."