.
There just doesn't seem to be much evidence that Minnesota has been the home for any significant period of time of a Saint of the Church. Oh, we have a few Saints and "almost Saints" who visited or worked here, one even Roman saint who is buried here. But nobody we can pray to as "our Saint."

Here, courtesy of "Father Z", is an article on another visitor who might be a Saint some day. 19th century Slovenian missionary, Bishop Frederic Baraga, bishop of the mission territory that was comprised of the region around Lake Superior, apparently is in the early stage of the long process of canonization. Bishop Baraga's large diocese was headquartered in Marquette, Michigan. Many Minnesota residents had the bishop as their ordinary when they first worked in the iron ore and copper mines of the Upper Peninsula of Michigan before they moved to one of Minnesota's three iron ranges.

A miracle through Bishop Baraga? [Father Z] I believe my friend, now Bishop of Marquette, H.E. Most Rev. Alexander Sample was once the postulator for the cause of Bishop Baraga, but that would have been many years ago. The cause has moved along. I believe the positio super virtutibus was already dealt with at the Congregation, but Bp. of Baraga, Servant of God, is not yet "Venerable".

There is now news from Marquette about a possible miracle.

this is from CNA:

Marquette, Mich., Mar 11, 2010 / 08:26 am (CNA/EWTN News).- The Diocese of Marquette is investigating an possible miracle attributed to Servant of God, Bishop Frederic Baraga. The official inquiry will move the cause for Bishop Baraga’s canonization forward, which was opened for the prelate in 1952.

In press conference on Wednesday, the current Bishop of Marquette, Alexander K. Sample, announced the recent development, saying, “Since my first days as a seminarian studying for the priesthood, I have had great devotion to Bishop Baraga.”

“As his eleventh successor, I am thrilled at the prospect of a miracle that will advance his cause. With all the priests, deacons, religious and lay faithful of the diocese, I give thanks to God for his, holy, priestly, example,” he added.

Father Ronald Browne, who has been appointed to lead the work of the canonical tribunal, explained the story behind the alleged miracle. “We have a case involving what was thought to be a tumor on a patient’s liver that showed up on various tests, including a CT scan and an ultrasound. However, when exploratory surgery was done, there was no tumor to be found,” Fr. Browne said.

The Diocese of Marquette reported that while in the Upper Peninsula, the patient and the patient’s family invoked the intercession of Bishop Baraga and placed his stole on the sick person’s abdomen. Following the prayers, the patient said that the pain in the abdominal area went away.

The diocese explained that in order for the event to be considered as a miracle, it needs to be affirmed as something that science cannot explain and be attributable to the intercession of the candidate for sainthood.

Once the tribunal has investigated the event – the process is scheduled to begin on March 12 – two physicians must testify regarding the physical condition of the patient before and after the event. After the all

eged miracle has been verified, documentation will be sent to the Congregation for the Causes of Saints in the Vatican, who will then submit the cause to Pope Benedict XVI. The Holy Father will then determine whether or not Bishop Baraga will be beatified.

If the miracle is recognized as authentic, the diocese will need to verify one more miracle in order for the Michigan bishop to be declared a saint.

Bishop Baraga was born in 1797 in Slovenia, and come to the United States as a missionary to the upper Great Lakes region in 1830. Ministering to the Odawa and Ojibwa Native American tribes, the bishop is said to have traveled throughout the 80,000 square mile territory by means of boat, canoe, horse, dog sled and even snowshoe. Often called the “Snowshoe Priest,” he was consecrated a bishop in 1853 and served until his death in 1868. Bishop Baraga is credited with writing a Ojibwa/English dictionary which is still in use today.

Bishop Baraga also has ties to my native Minnesota. On the North Shore of Lake Superior you can visit "Baraga’s Cross". 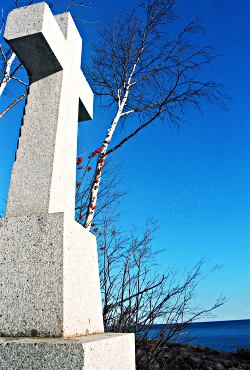 Only tough guys lasted for long around Lake Superior, and Father Frederic Baraga was one of them. The Slovenian priest arrived in 1831 and spent a long and frenetic life canoeing and snowshoeing between Ojibwe settlements in Sault Ste. Marie in Michigan; Grand Portage on the northeastern tip of Minnesota; and La Pointe on Wisconsin's Madeline Island.

One day in 1846, Father Baraga, learning of a possible epidemic among the Ojibwe in Grand Portage, set out from Madeline Island in a small boat with an Ojibwe guide. A terrible storm arose, but they were blown over a sandbar and into the quiet mouth of the Cross River, where the town of Schroeder is today. In thanksgiving, they erected a small wooden cross at the site, later replaced by a granite one.

The Snowshoe Priest, who compiled an Ojibwe dictionary in his spare time, became the first bishop of Upper Michigan and lived until 1868. He's buried in the 1890 Romanesque cathedral of Marquette, where efforts are under way to canonize him.

The Cross River is at Mile Marker 78, or 78 miles from Duluth's Canal Park. It's five miles south of Tofte.


Here are links to Saints and "Almost-Saints" who have a Minnesota connection: Archbishop Fulton Sheen; St. Peregrine; Father Darin Didier; Venerable Solanus Casey; Saint Nino; Dr. Giancarlo Rastelli; and St. Riccardo Pampuri. Search on Stella Borealis in the box in the upper left to find articles about these people.