For Twin Cities' Visitation nuns, 400 years of prayer and service 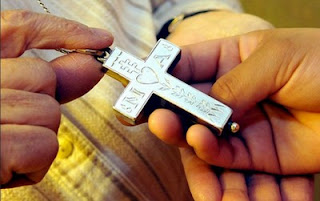 The Procession Cross, worn by all Visitation Sisters
.
In a tough North Minneapolis neighborhood, two houses are always open. The Visitation students helped care for toddlers and preschool children at the Northside Child Development Center. Some of the girls also went on ride-alongs with Minneapolis police officers, planted a garden at Turning Point and helped fill bags with flashlights, towels and toiletries for a group of children the sisters sponsor to go to summer camp.

No official signs hang outside, but those who live on the violence-ridden blocks know that inside they can find donated food, job help or tutoring for their children.

The women who live there don't wear religious habits, but neighbors know they're Catholic nuns who pray for them every day.

"We'll share what we have with people," said Sister Suzanne Homeyer, one of the seven sisters in the North Minneapolis monastery, the Visitation of Holy Mary.

Today, their religious order will celebrate 400 years of existence.

Six sisters brought the Visitation order from St. Louis to Minnesota 137 years ago. The Minneapolis group is the order's second Minnesota monastery. The first started in St. Paul with a small all-girls school. The St. Paul nuns, along with the Convent of the Visitation School, moved to Mendota Heights in 1966.

The Minneapolis monastery formed 20 years ago and became the order's newest group.

Stabbings, shootings and other violent crimes occur daily in the sisters' neighborhood, said Elizabeth Reed, chief operating officer for Turning Point, a rehabilitation center in North Minneapolis where the sisters volunteer and donate items for clients.

"What amazes me the most about the sisters is they give without fear," Reed said.

It was eye-opening for 18-year-old Madeleine Demeules to experience life with the sisters in North Minneapolis, she said. She and other Visitation students spent the past two weeks with the sisters for their senior service project.

"I feel like, being here with the sisters, I'm learning how I can continue living 'Vis' and what the religious mystery of the Visitation is," Demeules said.

The Visitation order follows and teaches Salesian spirituality, which can be described as "simple virtues," said Dawn Nichols, head of schools at Convent of the Visitation.

Simple virtues include living a life of gentleness, peace, humility and simplicity.

Those values "are really at the heart of this place," Nichols said.

Salesian spirituality was created by St. Francis de Sales, who was a priest and later a bishop. He founded the religious order with St. Jane de Chantal after having a vision of a long line of women who would serve the poor and the community through prayer.

The group began with three sisters, including de Chantal, in France.

More monasteries for the order quickly spread across the country.

Today, the order has almost 100 monasteries in countries all over the world, including in Asia, Africa and North, Central and South America. In addition to the founders, the order's Sister Margaret Mary Alacoque of Parayle-Monial has been made a saint. And seven sisters of the First Monastery of Madrid have been beatified as martyrs.

Sisters from the First Federation in the United States live cloistered, meditative lives, while sisters from the Second Federation, which includes the monasteries in Mendota Heights and Minneapolis, actively practice their beliefs in the community.

"It's a great opportunity to share with people what our spirituality is about," Homeyer said. She joined the group and moved to Minnesota in 1995.

She previously worked as a campus minister in Michigan, where she helped the poor and lived in a Catholic Worker house. She had met the Visitation sisters at a retreat four years earlier.

"I decided there was more to my life," Homeyer said.

The Visitation sisters gather within their monastery to pray four times a day and hold weekly Mass. The women also have personal prayer for an hour and a half each day.

In Mendota Heights, the convent is connected to the school, which is coed up to sixth grade and then becomes an all-girls school for the seventh through 12th grades.

Sister Jane DeChantal, 85, came to the order in the 1940s when it was in St. Paul. She entered at the age of 20 but had known since age 3 she wanted to devote her life to God.

Nuns then were cloistered within their monasteries, she said. When her family brought her to the convent, they feared they would never see her again.

"My family just broke down and cried," she said.

At age 36, Sister Joanna O'Meara is currently the youngest woman among the order's sisters in Minnesota. She joined the group seven years ago after moving from England.

Her defining moment into sisterhood was during a job interview for social work, O'Meara said. She felt "called" to at least try living as a sister, she said.

O'Meara said she hopes more women will follow her in the future.

"There are so few younger sisters around in many orders," O'Meara said. "It's really important to carry on a ministry here on the north side."

The North Minneapolis sisters live in two homes on Girard and Fremont avenues north. Although they live in a dangerous area, violence has not directly affected them.

But they have had their share of close calls.

Homeyer said that shortly after joining the group, she was mugged in the neighborhood — but the robber took only a bag with her pink slippers. In the mid-1990s, a man was fatally shot near the Fremont house. The sisters stayed with him until paramedics arrived.

Nine sisters live at the Visitation monastery in Mendota Heights.

Although the sisters no longer teach at the Convent of the Visitation School, students say they are very much a part of the school community from the moment students enter.

"Every now and then, we'll get a little knock on the door, and it's a sister," said Ellie McDonald, 17, an 11th-grader. "She might even give her input" on a lesson.

They share stories of the history of the Visitation order, McDonald said.

The sisters especially comforted McDonald last year when her father died unexpectedly of a heart attack, she said. The nuns were some of the first faces she saw at his wake.

"The Visitation community has been the biggest support I could ask for," she said.

Although the sisters frequently walk the school halls, students in certain grades also get the chance to tour their convent. The sisters raise peacocks on the grounds, too.

At school, the nuns attend sports matches and other events, participate in the orchestra and sell popcorn and cookies during lunch. But most important, students say, the sisters pray for them — whether it's during a tragic event or before a big test.

"I like the sisters," said second-grader Taleah Alldritt, 7. "If you have problems about something, they would help you solve it. It's really nice to have them here."

Each monastery will be celebrating the order's 400-year anniversary individually, Homeyer said. All the U.S. monasteries in the order plan to gather next year for the occasion.

"I see myself in that long line of sisters that Francis de Sales saw in that vision," Homeyer said. "It somehow makes me part of a legacy of prayer and service that is bigger than just me." Pioneer Press

See more photos of the sisters at the Pioneer Press link