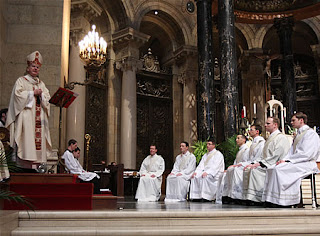 Archbishop John Nienstedt delivers his homily to the congregation at the Cathedral of St. Paul May 29 and to the seven men about to be ordained, seated at right: Deacons Joe Bambenek, left, Patrick Barnes, Alex Carlson, Paul Kubista, Erik Lundgren, Nathaniel Meyers and Doug Pierce. See more ordination photos.

On one of the most beautiful ordination days in recent history, Archbishop John Nienstedt ordained seven men to the priesthood May 29 at the Cathedral of St. Paul.

In fact, the weather was so gorgeous that the celebration after Mass took place outdoors in the Cathedral courtyard. There, well- wishers formed long lines to offer congratulations and receive a blessing from the newly ordained. The warmth displayed between the priests and their families and friends reflected a greater friendship that Archbishop Nienstedt described in his homily.

“The priest must internalize the message of Christ in such a way that he enters into a profound, interior communion with Jesus himself,” the archbishop said. “Put quite simply, a priest’s best friend should be Jesus.”

With that in mind, Archbishop Nienstedt encouraged the seven men to develop and commit to a deep, daily and healthy prayer life. He went as far as to say a priest who does not do this “is a walking contradiction — for he is living a lie.”

“It is a love that is meant to be given away,” Archbishop Nienstedt said, “a love to be shared.” Catholic Spirit
Posted by Unknown at 10:00 PM