Superior's Bishop Peter Christensen on "Why the Silence" on abuse accuations? 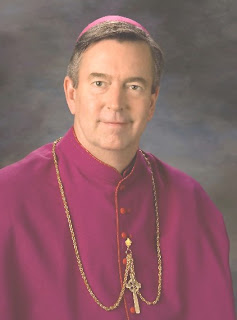 .
Bishop Peter Christensen,
former Pastor of Nativity of Our Lord parish in St. Paul
[Stella Borealis emphases] In a recent conversation a friend of mine was commenting on the sizeable number of secular newspaper articles that center on the topic of sexual abuse by clergy. He was perplexed by the fact that there have not been more responses made by the Church in regard to some of the assumptions made by the papers that he knows to be either exaggerated or false. Well aware of his frustration, which is shared by many, I began to explain the reasons for the absence of rebuttals to the media as I see it.

First of all, doing so makes the Church look either defensive or calloused, as if the leadership of the Church is out to protect itself. There is no question that there have been priests who have sexually abused minors. Many innocent victims and their families have been directly or indirectly wounded and scarred by such behavior. There is no denying this fact. In response to the damaging actions of some of the clergy, since the Charter for the Protection of Children was established in 2002, the Catholic Church has gone well beyond any other institution in setting up safe-guards to protect our young from such horrendous, sinful behavior.

What we often fail to remember is that the Church, like the rest of society, in regard to the disciplinary action of its members was motivated by the social beliefs and sciences of its time. Up until the 1980s it was believed that pedophiles (pre-pubescent) and ephebophiles (post-pubescent) could be rehabilitated and reinstated into the institutions they served. This was true not only for ministers of other Christian and non-Christian denominations, but also for secular institutions, such as teachers in our public school systems. As I have often heard it said and know it to be true, the framework in which we were making judgments was based on the knowledge of the time we made them. As an example of context, it would be like someone suing the Ford Motor Company today for a wrongful death of a grandfather when his airbag failed to deploy 70 years ago. The knowledge gained and serving us today in the realm of psychosexual sciences is far more understood than it was even twenty years ago. That which is sometimes referred to as “cover up” by the Church was nothing more than a lack of knowledge of what dangers were being done and what treatments could or could not be administered for rehabilitation.

Another reason for the lack of response to the secular press could be caused by a misguided prejudice against the Catholic Church for whatever reason. There is no doubt that the Catholic Church makes the front-page headlines in this regard. A while back, when I asked a prominent reporter from CNN, why he thought this was the case, he stated it is so because we are such a large institution. I said that I believe it is the case because we are the only institution in the entire world that can speak with one voice on issues of faith and morals. No other institution in the world can offer teaching and guidance with the authority of the Catholic Church. And no other institution in the world has the ability to speak with such a unified voice. As I said to the reporter, not everyone likes such a voice, to be reminded of the existence of God or to have his or her conscience tweaked. If you can silence the voice by destroying the Church’s credibility it would serve as a relief for some.

At the end of our conversation I thanked the CNN reporter for the attention given to these matters. It may sound strange, but in many ways when there is credibility of abuse, the reporting reminds us of the contrast of what is expected by the Church. We should be shocked by such contrary behavior to our beliefs. The day that reporting such information is not seen as horror will be the day that the Church has lost its message of the Gospel. It is newsworthy because it is scandalous behavior and always will stand in contradiction to the belief of our Catholic Church.

What I find difficult is when our local paper misquotes or exaggerates information. This frustration is exasperated when they are unwilling to make corrections and print the facts. Recently, our diocesan office responded to misinformation printed in our local Duluth paper. The paper made no corrections or points of clarifications. They stated that the Diocese of Superior had paid out nearly 3 million dollars in one settlement in 1989. I know differently. Since 1950, there have been 546 priests serving in our Diocese. Tragically, 12 of these priests during the past 60 years have what seem to be credible allegations of pedophilia or ephebophilia. That is 2.2 percent of our priest population in the Superior Diocese which is well below the national average of males who sexually abuse children. Eight of these priests are now deceased and the other four are no longer serving in active ministry. During this same period of time, the Diocese of Superior has been responsible for making settlements on 4 cases, paying a total of $135,000 from our own diocesan funds directly to victims. Our insurance companies covered other costs. This is nowhere near the amount as reported in the paper.

The third reason that the Church oftentimes seems silent in offering corrections or rebuttals to the media is because those who have been abused by priests have asked that their names and cases never be mentioned to others. These are legal agreements, set up by the Church and to be honored by the Church as requested by those abused. These confidentiality agreements are put in place in order to protect the good names and reputations of those abused. Unfortunately not all reporters or advocate groups appreciate this fact. Sometimes these groups, although they speak in terms of reconciliation, are more interested in retaliation against the Church in general.

All this being said, as Catholics we are meeting the situation of our times for our own institution, while the sexual abuse of minors is running rampant throughout society. As the Church grows stronger in the knowledge and care of the young, its leaders and congregations will better serve as educators and reconcilers for our religious and civic communities. This is not a pleasant journey, but to help expose and heal the sin of sexual abuse throughout our society is what we are called to do at this time in our history.

And at times, although we may be seemingly silent in response to the media, we as a Church are doing all that we can to correct our faults and to help others in society to deal with their similar issues in this regard. May Our Lord bless all who suffer from abuse with his healing presence, and strengthen all the faithful to serve as ministers of his pure love.
Superior Catholic Herald

Tip O the Hat to the Badger Catholic

He is a wonderful Bishop - this article is very good and makes so much sense. Thanks for posting Ray.

Yes, Ray, thanks for this. One can only hope this gets wider circulation. Would not hold the breath, however, that CNS (Catholic News Service) feature it. We Catholics would be alot better off were the Catholic press to step up to the plate and to play this kind of ball.

Unfortunately my computer crashed last night so I won't get it back for a week or so. Right now I'm travelling from library to library to get internet access and email time.