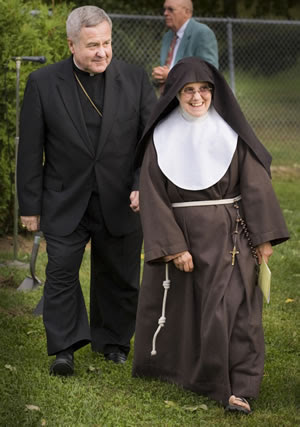 The theme of Pope Benedict XVI’s message for the upcoming World Day of Prayer for Vocations points to the important role Catholic home life plays in the promotion of vocations to the priesthood and religious life, said Archbishop Robert J. Carlson of St. Louis. [Formerly Auxiliary Bishop of the Archdiocese of St. Paul and Minneapolis, Bishop of Sioux Falls, SD, and Bishop of Saginaw, MI].

“The theme which the Holy Father chose places the burden on the local church to reflect on how it develops a culture of vocations,” said the archbishop, chairman of the U.S. Conference of Catholic Bishops’ Committee on Clergy, Consecrated Life and Vocations. “We know that the vocation comes out of the home.”

The papal message for the day of prayer, which will be observed May 15, was released Feb. 10 at the Vatican. The 2011 theme is “Proposing Vocations in the Local Church.”

“Every Christian community, every member of the church needs consciously to feel responsibility for promoting vocations,” especially in an era when God’s voice “seems to be drowned out by ‘other voices’ and his invitation to follow him by the gift of one’s own life may seem too difficult,” the pope said.

Pope Paul VI instituted the day of prayer in 1964 as a way for Catholics to focus on and pray for vocations.

In an interview with Catholic News Service while he was in Washington in March, Archbishop Carlson said the majority of newly ordained priests said they were influenced by the parish in their discernment for the priesthood.

According to results of a survey of members of the 2011 ordination class, released April 25, 66 percent of the respondents said it was their parish priest who encouraged them. Forty-two percent identified their mothers as having a major influence on their decision.

The annual national survey is conducted by the Center for Applied Research in the Apostolate at Georgetown University for the USCCB’s Secretariat of Clergy, Consecrated Life and Vocations.

CARA contacted ordinands by email, phone or fax to explain the survey; asked them to complete a brief survey online; and then followed up with respondents by email, phone or fax. This year, CARA reported that the response rate was 69 percent; 329 ordinands responded out of a total of 480 identified by theologates, houses of formation, religious institutes, and archdioceses and dioceses.

Survey results also showed that the average age of ordinands in the class of 2011 is 34. More than nine in 10, or 94 percent, reported they had some type of full-time work experience prior to entering the seminary, most often in education. On average, ordinands reported they were about 16 when they first considered becoming a priest.

Archbishop Carlson said parishes need to find a way to encourage the wider community to be more supportive of young men who choose a vocation to the priesthood, since many of them begin the discernment process at age 16.

“Most young people don’t understand what discernment is all about,” Archbishop Carlson told CNS while he was in Washington to attend bishops’ committee meetings. “They have not been taught from the pulpit or in the religion classes how to discern.”

The archbishop said he was interested in the influence Catholic education had on vocations this year. Results showed that 47 percent of the ordinands surveyed went to a Catholic elementary school and were somewhat more likely to attend Catholic high school. Thirty-nine percent of them attended a Catholic university or college, compared to 7 percent of all U.S. Catholic adults.

“We are going to make sure our Newman chaplains and our campus ministers are talking to young people about vocations,” the archbishop added.

Asked if the clergy sex abuse scandal had had any effect on vocations, Archbishop Carlson said it has not affected the interest or number of vocations. He noted that the survey showed that amid this challenge, more young people are responding to vocations.

“They were not involved in the scandal, and they believe that as they live out their vocation they can make the whole community, the body of Christ, stronger,” he said.

The 2011 survey also showed a continued pattern of growing cultural diversity in the ordination class, especially religious order priests. Ten percent of the class are Asian/Native Hawaiian/Pacific Islander; 4 percent of the U.S. Catholic population are Asian.

Fifteen percent said they were Hispanic/Latino; by contrast, about 34 percent of the U.S. adult Catholics are Hispanic/Latino. The remaining results showed 69 percent are Caucasian, 5 percent African-American and 1 percent other.

“There is a beautiful mixture of the people who make up the church in the U.S.,” said Archbishop Carlson, but added there was a need to foster vocations in the Hispanic/Latino community to address the needs of that growing segment of the U.S. Catholic Church.

For young men, parents and youth ministers who have questions on the discernment process, every diocese has a local website and vocation director’s office. The USCCB also has a website http://www.ForYourVocation.org. According to the 2011 survey, the majority of young people turn to such websites for information first, said Archbishop Carlson.

The archbishop said he prays that those discerning the priesthood will have the courage to listen and respond to their vocation.

“We invite them to listen to what they are hearing deep within themselves as to how God might want them to live their life,” said the archbishop. “And then (we) give them the support so they can have the courage to say yes.” Catholic Spirit