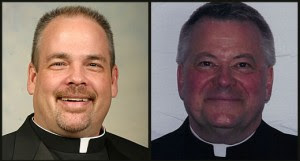 Father Louis Studer (left), director of Christ the King Retreat Center in Buffalo, has been appointed vicar provincial of the U.S. Province of the Oblates, the order’s No. 2 leadership position. His replacement at Christ the King has not yet been announced. Father Gregory Gallagher (right), a native of St. Casimir in St. Paul, has been appointed the province’s administrative assistant. Currently he serves as director of the National Shrine of Our Lady of the Snows in Belleville, Ill. Both men will begin their three-year terms in Washington, D.C., in June.

The Missionary Oblates of Mary Immaculate, an international order of missionary priests and brothers with members serving in the Archdiocese of St. Paul and Minneapolis, will commemorate the 150th anniversary of the death of its founder with a Mass and open house at Christ the King Retreat Center in Buffalo Sunday, May 22.

“It’s an opportunity to take a look at the gift that St. Eugene [de Mazenod] was to the church, who he was, and what kind of legacy he leaves us,” said Oblate Father James Deegan, a staff member at the retreat center.

Oblate Father Louis Studer, director of Christ the King, will concelebrate the 2 p.m. Mass with Father Deegan. An open house will follow from 3 to 5 p.m. Christ the King Retreat Center is at 621 First Ave. S in Buffalo.

Oblates founder St. Eugene de Maze­nod was born into a wealthy family on Aug. 1, 1782. He was ordained a priest at age 29. “His conclusion was, ‘If Jesus gave everything for me, then I, in turn, had better give everything for Jesus,’” Father Deegan said.

St. Eugene started the Missionary Oblates of Mary Immaculate in France in 1816. The order received formal ap­proval from Pope Leo XII in 1826.

In 1837, St. Eugene was named bishop of Marseille, France. When he died on May 21, 1861, six Oblate bishops and more than 400 Oblate missionaries were working in 10 countries.

Today, more than 4,000 Oblate priests and brothers serve in 68 countries. Members have been instrumental in founding 44 other religious communities and secular institutes, Father Deegan said.

In the archdiocese, the Oblates served for 75 years at St. Albert in Albertville. The also have served at Assumption in Richfield and St. Mary in St. Paul.

Currently, there are about 12 active and eight retired Oblates serving at St. Casimir in St. Paul and other area par­ishes, Regions Hospital in St. Paul, and Christ the King Retreat Center. One Oblate originally from St. Paul, Arch­bishop Roger Schwietz, currently serves as archbishop of Anchorage, Alaska [Prior to that, he was Bishop of Duluth]. Catholic Spirit