Bp. Sirba, formerly a priest of the Archdiocese of St.Paul-Minneapolis, testifies for defense of marriage amendment 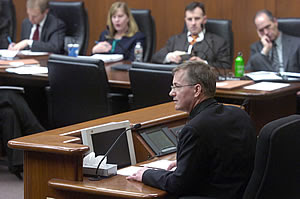 Archdiocesan newspaper of my native place, has a piece about the testimony in defense of marriage given to the House Civil Law Committee of the Minnesota Legislature by His Excellency Most. Rev. Paul Sirba, Bishop of Duluth. For this statement he spoke for all the bishops of Minnesota.

From my personal experience, Bp. Sirba was one of the best priests I have ever known. I have known him for 30 years.
Emphases and [comments] by Father Z.

Bishop Paul Sirba of Duluth testified May 2 before the House Civil Law Committee in support of a bill (HF 1613) that would put a constitutional amendment on the ballot in 2012 to define marriage as a union between one man and one woman. [Make it so!]

“Based on God’s Word given in divine revelation, we believe that marriage creates a sacred bond between spouses,” said Bishop Sirba, speaking for the Catholic bishops of Minnesota. “We hold this to be true not only for ourselves, but for all humanity.” [And marriage can be defended also from the point of view of reason, without the reference to divine revelation.]

The church’s convictions about marriage “find ample support in principles which can be discovered by human reason and which have been reflected throughout human history,” he said.

The House bill, introduced by Rep. Steve Gottwalt (R-St. Cloud), was approved by the Civil Law Committee by a 10-7 vote. A companion bill in the Senate (SF 1308), authored by Sen. Warren Limmer (R-Maple Grove), was passed April 29 in the Senate Judiciary Committee, where Bishop John Quinn of Winona testified in support of the measure.

If both houses pass the measure, a question would be placed on the ballot in November 2012 asking voters: “Shall the Minnesota Constitution be amended to provide that only a union of one man and one woman shall be valid or recognized as a marriage in Minnesota?”

Bishop Sirba was the third of seven people to testify on behalf of the House bill. Hundreds of people were directed to a lower-level room to watch the proceedings via live broadcast, as only ticketed participants were allowed into the packed hearing room.

Testimony in support of the bill was also given by representatives from four other faith groups, University of St. Thomas School of Law professor Teresa Collett and Jennifer Roback Morse, founder and president of the Ruth Institute, [Participates at Acton Institute's summer university. Great speaker.] a project of the National Organization for Marriage. Amendment opponents also testified.

Bishop Sirba said “the committed relationship between one man and one woman calls forth the best of the spouses, not only for their own sake, but also for the well-being of their children and for the advancement of the common good.”

In defending the institution of marriage, he emphasized that “persons with same-sex attractions are our sisters and brothers, and should not be deprived of their authentic human rights, including the most fundamental rights of all — the right to life and the right to love.” [It is impossible for them to claim a right to marriage, which can only be between one man and one women.]

The Catholic Church opposes discrimination against any person based on a same-sex attraction, he said. “At the same time,” he added, “meeting authentic human needs does not require changing society’s definition of marriage.”

Bishop Sirba said the bishops believe the amendment is needed because several legislative proposals in the past few years have sought to “transform marriage from an institution focused on the needs of children into a totally new legal entity centered on the happiness of adults.” [Can we conclude from this that passage of legislation allowing same-sex couples to "marry" and then in some way adopt children, is a form of child abuse?]