.
What was it like to live in a Duluth orphanage during the 1930s?

The Partika children — (from left) Richard, Lillian and Irving — were living in St. James Orphans Home on Duluth’s Woodland Avenue when this photo was taken in the 1930s. “Just us,” someone wrote across the front of the photo. (Courtesy of Father Richard Partika) 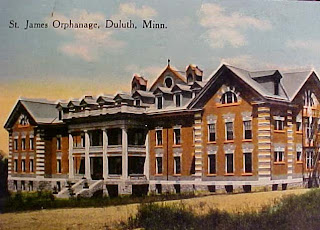 St. James Orphanage was built in 1909 along Woodland Avenue. The structure stands today as Woodland Hills but looks much different after several remodeling projects.

What was it like to live in a Duluth orphanage during the 1930s?

Not bad, according to Father Richard Partika, who wrote the following recollections of St. James Orphans Home, which was on Woodland Avenue at what is now Woodland Hills:

The children at St. James Orphans Home had chores to help run the place and to keep it clean. Both the boys and the girls had chores on their sides of the building. They swept and scrubbed the stairs, the halls, and their dormitories and playrooms. In the summer, the boys weeded the gardens and hoed the raspberry patches. The girls washed the dishes and worked in the laundry.

The haying and threshing seasons were my favorite. The days were the longest and warmest. In those days we had no tractors, balers or such. We pitched the hay with forks onto horse-drawn wagons and brought it to the barn.

When the orphanage fields were cleared, we went to Calvary Cemetery and cleaned the open spaces there and brought the hay home. In some years, when more was needed, we went out to the Lepak farms in Gnesen Township and brought in hay from there. I loved getting to drive the horse-drawn wagons, and I made sure I was first to volunteer.

The boys had a baseball field on the west side of the orphanage. We also had four swings, climbing ladders and other equipment. My favorite activity was paddling around in the Amity Creek, which ran through the farmlands. In the winter, we had sleds and good hills on the west side and were able to go well down into the pasture land. On the east side of St. James was a skating rink for both the boys and the girls. The Duluth firemen flooded it a couple of times each year in the early part of winter. Later, it got so snow-filled that we kids just shoveled a path on the ice to skate in a circle around the rink. In the summer, the girls had swings and teeter-totters and their own shallower area upstream on the Amity Creek

The chapel was on the third floor across from the Little Boys Dormitory. We all went to Mass every Sunday and every school day. On other days we went voluntarily by telling the sister prefect the day before to wake us. After I made my First Communion on May 27, 1934, I got to serve Mass almost every day, either in the orphanage chapel or in St. John’s Church, which was nearby. Msgr. Michael Boland usually said his weekday Mass at St. John’s.

Sister Yvonne Campbell taught us to sing, and I still know most of the St. Gregory Hymnal by heart. (She also made all the preparations for my first Mass in 1951. I also made many private visits to the chapel during free time.)

In winter or in bad weather, both the boys and girls played cards and board games in their playrooms. The boys also had a pool table. There was a gym on the boys’ side for basketball, but there were four pillars in the middle, until 1938, when Fr. George Gallik designed a way to put beams in their place and to lower the gym floor a few feet. Fr. Gallik had planned to be an engineer before he decided on the seminary.

St. James Orphans Home was a very nice place to live. We had very good nuns and priests running it. It was as normal as you could possibly make it. Sure, kids were lonesome for their families and wanted their families restored. But it just couldn’t be. Duluth News Tribune