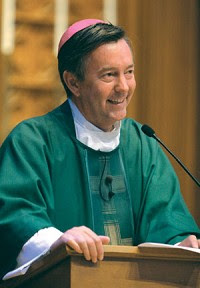 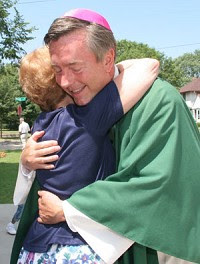 .
.
Two days before she died, his mother told his sister that she had a vision of a bishop’s ordination, and that bishop was her son, Father Peter Christensen.

When his sister told him, he didn’t even let her finish the story. He wasn’t interested in being bishop, he said.

But deep within himself, he felt God was preparing him for something significant, especially over the last two years. As he approached the Easter triduum this year, something told him it would be his last at Nativity of Our Lord, the St. Paul parish where he has been pastor since 1999. Parishioners told him that his Holy Thursday homily sounded like a goodbye.

Pope Benedict XVI appointed Father Christensen, 54, bishop of the Diocese of Superior in Wisconsin on June 29. As required by all bishops at age 75, Superior’s Bishop Raphael Fliss submitted his resignation in 2005.

Father Christensen is to be ordained a bishop this fall, which will be followed by his installation in the Superior diocese. Read the balance in the Catholic Spirit

That is exactly what he said to me - "I'm not interested in being a bishop." And I believe his mother had that dream - she was a very spiritual woman.

The Bishop-elect looks good doesn't he. That image with the child is perfect - he loves kids, cares about their education, etc. He's a GOOD guy!