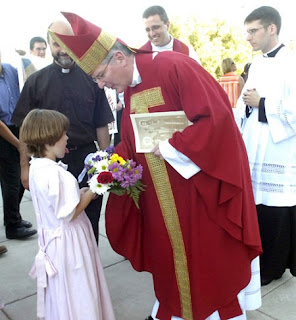 Coadjutor Archbishop John Nienstedt's welcoming Mass June 29 seemed to echo the vision written in Latin on his coat of arms: "That they may be all one" (John 17:21).

About 3,000 people, representing races and cultures from across the archdiocese, came to the Cathedral of St. Paul to celebrate the historic Mass, which lasted nearly three hours.

Bishops and priests, many from throughout the Archdiocese of St. Paul and Minneapolis, dressed in their red vestments in honor and recognition of the feast day of the Apostles Peter and Paul.

Archbishop Nienstedt (pronounced nine-stedt) received thunderous applause and a standing ovation from the congregation after Msgr. Martin Krebs, charge d'affaires at the apostolic nunciature in Washington, read a letter from Pope Benedict XVI naming him as coadjutor archbishop of St. Paul and Minneapolis.

At the Mass, many languages were spoken, including English, Tagalog, Nigerian, Korean, German, Norwegian and Gaelic. The second reading (2 Timothy 4:6-8, 17-18) was read in Vietnamese.

Archbishop Flynn said the diversity was representative of Jesus Christ and his church, as well as the Cathedral's patron saint's mission of evangelization to people across the world.

Archbishop Nienstedt delivered a homily that was interrupted repeatedly by applause as he addressed his vision for the archdiocese.

During his address from the pulpit, Archbishop Nienstedt displayed his talented singing voice. He sang a short hymn at the beginning of his homily and encouraged a sing-a-long at the end.

"Much ink has been spilled in the press over speculation about how this new coadjutor will differ from the present archbishop," Archbishop Nienstedt said.

"But frankly, I believe such speculation is misplaced. Leadership in Christ's church should not be about our differences in personality or administrative style, but rather our commitment to the message and mission of the Lord Jesus."

As Archbishop Nienstedt descended the cathedral's front steps, hundreds of congregants piled into shuttles to the Crowne Plaza Hotel in St. Paul for a cake and coffee reception. Read it all in the Catholic Spirit

Want to see more pictures of the Archbishop? Check out the Catholic Spirit's Photo Galleries of his past, present, and future!

Welcoming an Archbishop
• Conversations with the coadjutor
• Thousands of invitations, hundreds of hours to celebrate
• Vocations top priority in New Ulm
• Bishop on the prairie
• Reader Responses