Sister Mary Gibson receives her habit as a postulant in the order of the Benedictines of Mary, Queen of Apostles

.
Mary Gibson, now Sister Mary Gibson, UST graduate, formerly a Minnesota blogger who achieved worldwide fame as the "Roamin' Roman" in her last year of college and as "Veritatis Splendor", formally received her habit as a postulant in the order of the Benedictines of Mary, Queen of Apostles. She joined the order last Summer. The blogs will remain active for viewing for the forseeable future.

Four new "Brides of Christ" took part in the ceremonies that took place on the traditional feast of the Epiphany, Tuesday, January 6 (not the Sunday celebration), in Kansas City, Missouri, presided over by Bishop Robert Finn. A fifth sister made her first profession of solemn vows at the same ceremony. The Kansas Catholic blog has more detail and pictures, here and here [and Jan 12, here, too] 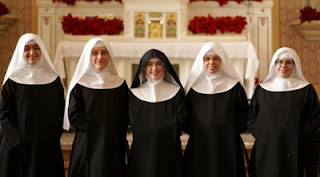 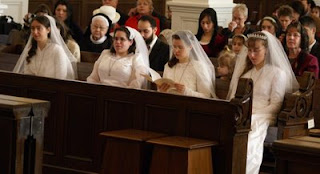 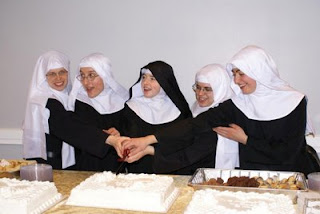 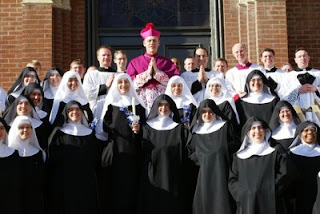 Wouldn't you just kinda figure that these Benedictines have more young sisters, novices and postulants than most "progressive" orders all put together?

Is anybody paying attention in those dying progressive orders?


Pray for Sister Mary and all of them.
This is a contemplative order and
their particular apostolate is to pray for our priests.

I am always struck by how joyful nuns look. I had a habited nun once tell me they have so much joy because they live the nuptual life with Christ here on earth that we all are called to in Heaven. How beautiful it must be to be Christ's bride here on earth.

I believe when she receives the habit she is no longer a postulant but a novice.

Sanctus: You ought to send those sentences to every religious order. So well said.

I remember when I first saw a photo of my Mom's sister in her wedding dress. She was a member of the Duluth Benedictines (Sister Ann Edward. She ultimately became the President of their college. She died three or four years ago).

But back in my pagan days, it looked very strange to me because I had never heard the term "Bride of Christ" and probably wouldn't have believed it if I had.

I was very moved today to see Mary in her wedding dress.

Ray, the ladies up a St. Scholastica would likely censure these photos and lockdown any coputer that's downloaded them. What they've done to that one-time gorgeous facility! An underground rabbit warren serves as Chapel and the library stacks are in vaulted arches. And a big, ugly and hastily-built science building (or other?) utterly destroys the campus' former grand allure.

I'm somewhat familiar with St. Scholastica as my aunt was a nun there for 60+ years until her death a few years ago.

What you say is true. Because the order is aging rapidly, making it difficult for elderly nuns to get to Mass, they moved the chapel from the second floor down to the lower level and moved the library into the old chapel.

Many of the nuns that remain expected that they would have become priests by now. They just don't understand.

They get very few new vocations and I'm sure that in another 20 years or so there won't be much left of the order.

Fortunately for the preservation of the building and grounds, the college is doing quite well. Similarly, the Benedictine Health Care System, founded by them, is also doing extremely well. But I doubt that there are very many nuns working in it.

M. Eileen said...
This comment has been removed by the author.
6:27 PM

Mary Gibson is now Sr. Neva and the four new "brides" are in fact novices. Their previous status in the community was as postulants. Also, Sr. Grace made her first profession, which is refered to as "simple" vows. Each community is somewhat different, but simple profession can be renewed up to 6 years or so until final or solemn vows are professed. In the Benedictines of Mary, a professed sister is in simple vows for three years before taking final vows. All so much more complex than just saying "I do!"

The page on the Sisters site announcing the Epiphany ceremony is:
http://www.benedictinesofmary.org/site.php?id=55

This is a beautiful, vibrant community with a particularly needed charism. It takes more than a habit to make any community. The habit is but one element and I pray for God's blessings on all communities in their service to the Church.

I've known of communities which have "died out," despite long histories and habits. In the 1980's, I knew an Augustinian father in Washington D.C. who had said Mass for one community of sisters with dwindling numbers who were looking at dispersing into other convents &/or nursing homes. My priest friend was very sad for them and asked how they were taking it emotionally. The sisters answer was that they gave their lives to serve God, and if this particular order was no longer of use, they were happy to accept it as God's will and move on. "We are ecclesiastical women, and have no fear of change. God will always watch over His Church."

I have always been very moved and edifyed by that witness of their faith.