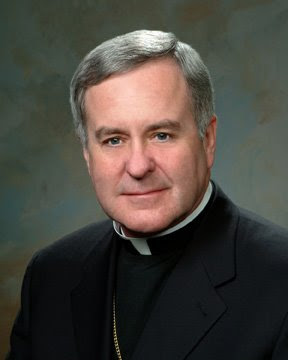 .
With this morning's appointment, the church of St Louis now prepares to receive its 13th head since Joseph Rosati was named its founding bishop in 1827.

For the last three appointments under the Arch, however, the must-read brief has come from the Gateway City's Patricia Rice, who covered the arrivals of Archbishops Justin Rigali and Raymond Burke for the Post-Dispatch and now, with the web-only Beacon, continues the tradition with an extensive Day One piece already prepped on Archbishop-elect Robert Carlson:

St. Louis’ new archbishop is known as genial prayerful man, who is well liked by other U.S. bishops. He was described as dynamic, self effacing and “always kind” by lay and clerical Catholics in Saginaw in interviews in February. His style of preaching is conversational and approachable.

“He is very normal, always been normal,” said his younger sister Cathy Carlson Percival of Minneapolis in a recent interview with the Beacon. He’s wonderful with young people whether they are strangers, parishioners or his nephews and nieces, she said.

He shines in talks with students and those about to be confirmed, said JoEllen Linder, vice president of admissions at Presentation College in Aberdeen, S.D., and a former administrator at Mount Mary College in Yankton, S.D., where she saw Carlson in action in the 1990s.

“He’s very personable, absolutely can relate to people,” she said adding that he is widely known for his success in encouraging young men to become priests. “When that much success happens in getting seminarians you know that he’s good with people.”

Carlson himself described the ideal effective bishop in an article he wrote in 1999 in Lay Witness magazine, published in Steubenville, Ohio.

In Carlson’s words: “Kindness, courtesy, meekness, gentleness, humility, patience, prudence and eager concern are the virtues which must describe the pastoral ministry of the bishop. Bishops must, before all else, be men of faith, outstanding witnesses of the life of the Holy Spirit. They must be dedicated to prayer and the constant reading of Scripture. Only by drawing upon the wealth of the interior life of grace can the ministry of the Bishop effectively take form.”

Carlson has been active on the floor of the U.S. Conference of Catholic Bishops' meetings He goes to the microphones and in genial tones makes incisive remarks, never hogging the mike, never the gadfly.

Other American bishops have shown their respect for Carlson by electing him to important conference posts. Some bishops, even archbishops, run and run but do not win high posts. Carlson, however, now chairs the bishops' conference Committee on Priestly Life. Fellow bishops elect hard workers who seem to love being priests to this job. That same joy in being a priest helps them encourage young Catholic men to consider becoming priests. St. Louis native Archbishop Tim Dolan of New York is a former Priestly Life committee chair.

The bishops’ conference also elected him to a three-year term chairing its Catholic Charismatic Renew committee, which he completed last year. In the Dakotas he had friendly dialogues with leaders of other faith groups and is likely to become active in the St. Louis Interfaith Partnership, one source said...

Carlson's gifts as a fisher of priests has resulted in his ordaining eight priests since he arrived in Saginaw. Five more Saginaw men are to be ordained this spring. In comparison, some large metropolitan archdioceses will ordain three or fewer this spring. His small diocese has 24 seminarians “in the pipeline."

Just as he did as a young priest, Carlson hangs out with seminarians for a mix of God talk and sports talk over casual meals. He serves as his own diocesan vocations director, which is rare for a bishop. Each year the Saginaw vocation office issues a new artist poster, always rather cool, that parishes and schools post to encourage vocations. At larger Masses and in the diocese’s newspaper, much attention is given to its current seminarians.

His St. John Vianney residential house in the Saginaw Diocese lets men considering becoming priests live in community with spiritual direction while they continue working or finish college before determining that they will enter a seminary.

Catholic bishops long have known Carlson’s ability to cast the nets wide for young men interested in the priesthood. More than a decade ago, he was one of the two main speakers to address U.S. bishops at a National Vocations Symposium. The other speaker was the late Cardinal Pio Laghi, then head of the Vatican’s Catholic education department....

In 2003, Carlson told the senior U.S. senator in his state, Thomas Daschle, a Democrat. that his general approval of abortion rights was in opposition to centuries of Catholic social justice teachings condemning abortion and wrote urging Daschle to support a ban on late-term abortion.

Daschle, who voted against the ban, went onto the Senate floor and read into the Congressional Record a denunciation of Carlson for speaking in a way "more identified with the radical right than with thoughtful religious leadership."

Whether the bishop would have denied Communion to Daschle was never an issue, because the senator remarried after a divorce and had not been eligible under church law to receive communion. Later, Carlson asked Daschle to stop referring to himself as a Catholic in campaigns....

Pope Benedict has moved away from several of John Paul II’s bishop-picking standards including that the Vatican won’t make a man an archbishop in his native diocese. Benedict has returned popular “hometown’” priests who had been bishops of smaller dioceses to fill the bishops’ chairs in Detroit and Pittsburgh.

Many St. Louis Catholics had held out a slim hope that the pope would name St. Louis native Timothy Dolan, with his gift for spreading joy, as St. Louis archbishop. And when Benedict named Dolan to lead the New York Archdiocese, expectations were raised for the new St. Louis archbishop. It was the talk of Lenten prayer group gatherings and Friday fish fries. “St. Louis deserves to get as good as we give away,” said Jim Sullivan of St. Joseph Parish in Manchester who knew Dolan as a boy. “We deserve a man of the people who’s a pastor, a loving pastor. The archdiocese can hire all the bookkeepers and lawyers it needs, we need a shepherd to pray here in St. Louis.”

In accord with the norms of the canons, Carlson must be installed in the mosaic-rich "New Cathedral" of his new charge within two months of this morning's appointment.

Shortly thereafter, the ninth archbishop of the "Rome of the West" will head to the other Rome, where he'll receive the pallium, the symbol of his new office, from Pope Benedict on the 29 June solemnity of Saints Peter and Paul.

Of course, he'll be in friendly company -- the native son of Cardinals' Country recently landed here in Gotham will be along for the ride to receive his second one. Whispers in the Loggia

Settling the most-awaited of the current docket of appointments, the Pope has named Bishop Robert Carlson of Saginaw as archbishop of St Louis.

Known for his success with drumming up staggering numbers of seminarians in the two prior dioceses he's led, the 64 year-old Minnesota native -- ordained a bishop before his 40th birthday -- succeeds Archbishop Raymond Burke, who was named the global church's "chief justice" late last June.
Posted by Unknown at 7:08 AM

Such good news! He is one of the best!

It used to be Baltimore, Boston and New York that ran the American Church.

But I wonder, if we get another 20 years out of His Holiness, it might be the midwest that runs the Church:

The four bishops of Indiana are all great, too.

These men are some of the finest shepherds to be found anywhere, most of them appointed by Pope Benedict.