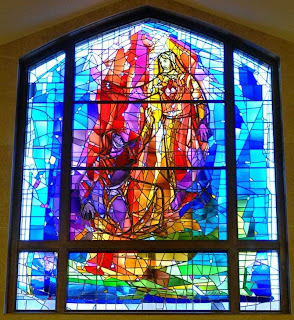 Click on Image for Full Size View
More people than usual are attending Cathedral of the Sacred Heart [in Winona] these days, and not just for the Mass.

They come to sit on the stairs and stare up into the reds, greens and blues of the massive new stained glass window.

The Sacred Heart Window, 16 feet high and 10 feet wide, was dedicated Saturday in memory of James and Genevieve Hauser and on behalf of their their children, grandchildren and great-grandchildren. It towers over the entrance to the church. The window shows Sister Margaret Mary Alacoque[, patron saint of Devotions Before the Sacred Heart,] kneeling before Jesus, who is revealing his sacred heart. The deep blues and greens make Margaret Mary hard to see at first, but look closely and her figure appears in the color.

James and Genevieve Hauser began going to the church when it was first built in the early 1950s. They sent their children to Cathedral Elementary School. Some of the children are still members of the parish.

"The church needed the sacred heart theme," said Jim Hauser, one of the children. "It didn't have that theme in any other windows."

The idea for the window had been brewing in the mind of Jim and his brother Mike for more than a year. They wanted to build something in memory of their parents. So they stuck with what they knew - glass. The brothers took over their father's business, Willet Hauser Architectural Glass, after he retired. They have since been producing stained glass windows for churches across the country.

"This choice was just natural to us," Hauser said. "Now we can give something back to the church and to our parents."

It's also a good fit for Winona, which some residents call the stained glass capital of the world.

Jim Hauser picked designer Charles Z. Lawrence, who had worked with the company in the Philadelphia office, and told him to not hold back on the creation. It wasn't long before the first drawing was completed.

"I first saw the design on a 8 x 14 piece of paper," said the Rev. Richard Colletti, priest [pastor!] at the Cathedral. "It was stunning then."

Piece by piece, the window was put up Monday and Tuesday last week. People have since been in and out of the church, gazing into the mix of color and light.

Colletti likes to watch the sun move through the glass for a few minutes before his morning prayer.

"It brings a different light into the church," he said. "Something to speak to us all." Winona Daily News

I know many people in the Winona area that have not been pleased with the "renovations" at the Sacred Heart Cathedral.

That is a very nice way to honor your parents.