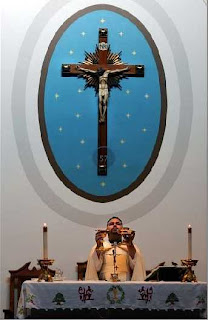 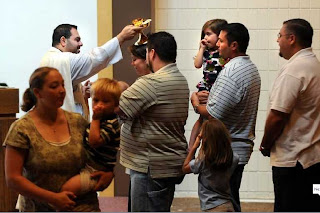 For Kathryn Deeb, Holy Family's move from St. Paul's West Side was bittersweet. "The old church was home," Deeb, 84, said of the parish's former building, built in 1950, at 203 E. Robie St. The church held its last Mass there in July. But Deeb, like other members of the nearly century-old Maronite Catholic church, said their move to Mendota Heights is a sign of progress.

They say the new building, a former Lutheran church at Minnesota 110 and Lexington Avenue, is larger and closer to where members now live, and provides more parking and room for expansion.

The Rev. Rodrigue Constantin said establishing roots through faith, culture and community is something the parish has done before. "Once again, we're building for our future," he said.

The Church of Holy Family was established in 1918, when a small group of Lebanese Maronite immigrants who settled in St. Paul bought a Protestant church on Robie Street for $2,250 and remodeled it. "The location was very convenient. They walked to church," said Constantin, 34.

Holy Family's second church was built in 1950 at the same spot, a block north of Cesar Chavez Street. Now for sale, it features a low-pitched roof of red Spanish tile and other architectural details of early Romanesque churches of Syria and Lebanon. "It's such a pretty church," said Deeb, who grew up on the West Side and began playing organ at Holy Family's first church at age 14.

In the 1970s, many of its members — second-generation Lebanese immigrants — began moving out of St. Paul and into the southern suburbs, Constantin said. "Families moved to Inver Grove Heights and Eagan and other suburbs," he said. "Now, there are very few of us left in St. Paul, virtually none on the West Side."

The idea to move started brewing about 10 years ago, Constantin said. In 2004, church officials surveyed the parish's approximately 200 members and found 80 percent were in favor of a move. The parish council and stewardship committee began a relocation project and launched a capital campaign. Building a new church would have been too costly — about $3 million to $4 million — Constantin said. When they found the current site in October 2007, "we knew it would be the perfect fit," Constantin said.

The new building is about 10,000 square feet and sits on three acres. The plan before the real estate market softened, Constantin said, was to sell the St. Paul church and build an addition with a 400-seat social hall and classrooms off the new building. But without a buyer for the old church, congregation members decided to scale back on remodeling plans in the short term. They modified the altar area, tore down a few walls to make room for a 200-seat social hall and expanded and upgraded the kitchen.

They also brought along 10 large stained-glass windows donated by the church's founding families. Now worth about $10,000 apiece, the windows were carefully removed from the old building and installed in the new church in August. "We wanted to make the transition smooth for our members, and it helps when you bring memories with you," Constantin said. "It's very important to feel at home when you pray."

Holy Family takes pride in being one of the few churches around that preserves Aramaic — the language of Christ — in its liturgy, Constantin said. But he also noted that about 30 percent of its members are neither Maronite nor Lebanese. "What we hope to bring to the Mendota Heights community first of all is our faith heritage," Constantin said. "And we'd also like to share our ethnic heritage, whether it's through food or culture."

One way the congregation hopes to integrate into the community is through its annual fall festival, which takes place today and features Lebanese food, ethnic music and dancing. Member Joanna Conover said the new location already is attracting area residents. "We've seen a few new faces," said Conover, 50, of Maplewood, after a recent Mass. "People are starting to notice us."

That's true for Bernadette Seliski, who started attending Mass at the new church building after a recent move to Mendota Heights. She previously attended St. Maron Catholic Church in Northeast Minneapolis — the only other Maronite church in the Twin Cities.

"I was happy to see they were coming here," said Seliski, 60. "I like the traditions of a Maronite church. It's what I grew up with."

Constantin said they are close to selling the St. Paul building to an Ethiopian Orthodox church. "They're immigrants, too, and renting space somewhere now," he said. "So it would be their first church, like it was for us. So it's a nice feeling to know that our first home would also be their first home."

If You Go Holy Family Maronite Catholic Church will hold its annual Lebanese Fall Festival from 11 a.m. to 5 p.m. today at its new location at 1960 Lexington Ave. (corner of Lexington and Minnesota 110), in Mendota Heights. The outdoor festival features authentic Lebanese food along with music and children's games. There will be a large silent auction and a raffle for a $1,500 grand prize. For more information, go to holyfamilymaronite.org. Pioneer Press