Life in a Seminary

.
The Columbus Dispatch recently published something unparalleled in secular journalism; probably in Catholic journalism also. They printed six major articles in one week on the life of one seminarian at the Vatican's Pontifical Seminary Josephinum in Columbus, Ohio. And the seminarian they followed was Robert Bolding, who had formally begun his discernment at the St. John Vianney Seminary in St. Paul.

I published the first article here on Stella Borealis before I realized that the article was one of a series. The series ends with Father Robert's ordination last June in Phoenix. The homilist at Father's first Mass was Father Bill Baer, Rector of the SJV seminary. Father Robert obviously did not have hard feelings when he left SJV three semesters before graduating. It was his personal vocation struggle that impelled him to "take a break."

Here are links to the Columbus Dispatch articles:

Robert Bolding's Journey into the Priesthood 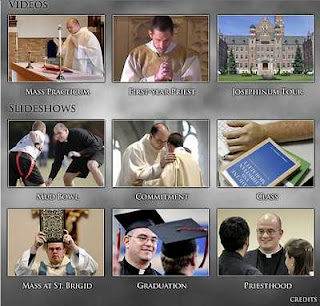 "The path to the priesthood is the one less traveled as is evident by the 40-year low in the number of Roman Catholic Clergymen serving a growing church. To shed light on the mysteries of priestly training, and the sacrifices made by those who are called, The Dispatch followed seminarian Robert Bolding through his final year of study at the Pontifical College Josephinum for this six-day series."

'Precious commodity'
As the Roman Catholic church struggles to fill its pulpits, a few young men step forward for rigorous training toward priesthood
The brotherhood

Of all the vows taken by priests, pledging a life of celibacy is the perhaps the most challenging for seminarians and the Church

Life inside the Pontifical College Josephinum is structured in solemn study punctuated by prayer (and an occasional beer)
Monday, August 24, 2009 ... Traffic snaked along N. High Street near I-270 in a bumper-to-bumper line of frustration as the sun rose over the Pontifical College Josephinum. The taillight-flashing bustle of commuters contrasted with the serenity a few hundred yards away, where students flowed quietly into a chapel inside the seminary's College of Liberal Arts building. . . .

Rigors of academic studies challenge seminarians, as does the sacrifice of priestly training
Tuesday, August 25, 2009 ... academic dean's office door: "What If the Hokey Pokey Is What It's All About?" Not much is so light-hearted about the curriculum for Robert and the other 163 students enrolled at the Vatican-owned Josephinum. "We don't offer under-water basket-weaving," Ross said. Like the other 45 Catholic seminaries in the U.S., the Josephinum's curriculum must conform to the Program of Priestly Formation ...

Somewhat isolated in schooling, seminarians depend on local churches for contact with the real world
Wednesday, August 26, 2009 ... A Roman Catholic seminary is devoid of much variety beyond the personalities and varying interests of its staff, faculty, and students. Although hailing from dioceses across the world, the 164 students at the Pontifical College Josephinum last year were all males - mostly whites in their late teens or 20s. They were bound in religious devotion and united in purpose: To test ...

God's work begins with death to self, a celebration of new life and the stark realization of challenges ahead
Thursday, August 27, 2009 ... Phoenix. With that, Robert lay down on the blue slate floor and buried his face in his clasped hands. The idea of becoming a Roman Catholic priest had floated as an abstract thought, unencumbered by the often hard truth of reality. Robert was busy studying and praying, day after day, year after year -- the final four at the Pontifical College Josephinum, a Catholic seminary on the North Side, where he took ...
Posted by Unknown at 3:47 AM

Robert was in seminary at SJV with me and I'm very happy to hear of his ordination! Deo Gratias!