Forgive us our debts: when you can't afford a religious vocation -- Contact Minnesota's Laboure Society

.
Forgive us our debts: when you can't afford a religious vocation 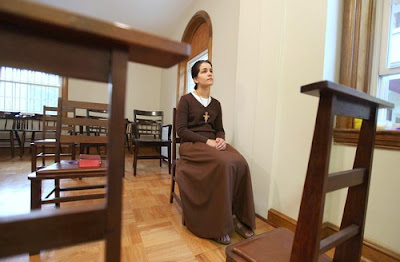 One of the often-unreported stumbling blocks to a religious vocation isn't spiritual.

A young Chicago woman preparing to be a nun is running a road race seeking pledges to help her pay off $94,000 in student debt. Some experts even attribute the decline in vocations to the problem.

Alicia Torres must raise $94,000 in order to take a vow of poverty.

Drawn to the Roman Catholic sisterhood while she was a student at Loyola University here, Torres faces the same barrier as many others considering such a religious life: college debt. Today, Torres and a group of friends will run Chicago's Half Marathon -- 13.1 miles along the lakefront -- in hopes of receiving enough pledges to pay off $94,000 in student loans.

"You can't live a vow of poverty with a bunch of debt," said Torres, a 2007 graduate. "If God wants you to do something, he clears the way."

Torres is one of hundreds who heeded the call of Pope Benedict XVI when, on his American pilgrimage, he bid his young flock to consider religious life. Though she has encountered romantic possibilities that tested her resolve, she said, she has had abundant moments of clarity that she is on the right path.

"I just know this is what Jesus asked me to do," said Torres, 24, who with two others is founding a new Franciscan community on Chicago's West Side.

Torres fits the mold of many young Catholics longing for traditions that waned after Vatican II and gravitating away from modern religious orders whose members live on their own, devote less time to community prayer or no longer wear habits. Experts say the inability of modern orders to attract new candidates and the lack of commitment among America's secularized youth have led to a sharp decline in religious vocations in the U.S.

But some attribute the downturn to debt.

Five years ago, Cy Laurent of Eagan, Minn., founded the Laboure Society, a nonprofit group dedicated to eliminating the educational debt of Roman Catholic religious candidates. He insists that a lack of capital, not a lack of commitment, has kept hundreds, perhaps thousands, of faithful from answering God's call. Torres is one of about 100 current clients.

"There are thousands discerning priesthood and religious life in North America. That's the good news," Laurent said. "The bad news is they all have debt. . . . We as families, as community, as institutions, as government, have said, 'Go right along to college on a credit card and when you make the big bucks pay it off.' "

Brother Paul Bednarczyk, executive director of the Chicago-based National Religious Vocation Conference, a professional organization of Catholic religious vocation directors, said educational debt has become an issue as more men and women hear the call to serve the church after acquiring college degrees and student loans. Each religious order has its own policy regarding payback.

"Some communities are in a financial position to pay off the loans as long as the woman or man is with them through the formation process," Bednarczyk said. "If their [mission] is education, it can be seen as an investment."

Sister Kathleen Skrocki works with young women contemplating religious life in the Chicago archdiocese. She said a couple of women over the years have confessed to entering the process because they couldn't pay off their debt.

"Thank God for their honesty," she said. "That's why the discernment process is so important. If you know the woman is really sincere -- and vocation directors get a sense after a while that this person is meant for religious life -- how can we help her?"

Laurent said those who apply for assistance must go through a rigorous screening process, including a letter of support from a bishop, superior or abbot, before receiving help from the Laboure Society.

Leanne and Manuel Torres always knew their oldest daughter had the conscience to become a nun. Home-schooled with a Catholic elementary curriculum and enrolled in a Catholic high school, Alicia attended daily Mass with her mother and siblings and constantly engaged her mother in intense spiritual conversations.

"I thought that sooner or later she would be religious," said her father. "I suspected that for years. I knew she wanted to try to help the needy and promote the faith."

Alicia Torres and her two peers are founding the Franciscan community in the Mission of Our Lady of the Angels, the site of a school fire 50 years ago that killed 92 children and three nuns. The blaze prompted an exodus of many families from West Humboldt Park to the suburbs, leaving poverty and crime in their wake. Drug dealers and prostitutes work the corners around the Our Lady of the Angels parish and rectory, where the three aspirants now live and worship.

She hopes to transform her marathon training into a running club for neighborhood youth, and she dreams of the day she can lead a 5K wearing her habit. Los Angeles Times
Posted by Unknown at 8:47 PM