If you are what you eat, a growing number of churches are making sure that people eat the right stuff. 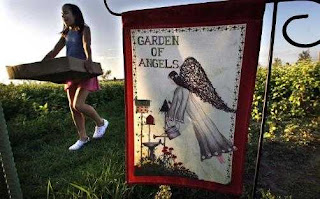 .
To most Minnesotans, "church food" means Jell-O and hot dish. But it's taking on a new meaning for a fast-growing segment of the religious community, where a burgeoning connection between faith and food focuses on healthy eating.

Churches aren't just talking about it; they're putting their broccoli -- not to mention spinach, tomatoes and herbs -- where their mouth is. They are growing food to donate to the hungry, organizing farmer's markets for neighborhoods that lack easy access to fresh food and getting involved in community-supported agriculture.

The gold standard of church gardens occupies a field behind Guardian Angels Catholic Church in Oakdale. By the time the fall harvest comes to an end, an army of 300-plus volunteers will have reaped 10,000 pounds of produce to donate to local food shelves.

"It's a perfect way to put our faith into action," said Bob Walz, who oversees the parish's Ministry of Justice and Outreach.

The garden was the brainchild of church members Barb Prokop and Maggie Lindberg. The church had a large grassy field that served as a buffer between it and a golf course, so Prokop and Lindberg made their pitch: Turn the land into a volunteer-run garden that grows organic fruits and vegetables to give to people who can't afford them.

"Our goal always has been to provide fresh produce for people who have no access to it," Prokop said. "Every food-shelf drive asks for canned or boxed food, which is understandable [because of storage issues]. People who use the food shelves usually don't get fresh fruit and vegetables."

The only way the produce could be any fresher is if it were still on the vine. As one team of volunteers picks and cleans the produce, another team stands by ready to deliver it. Sometimes, it's in the hands of the recipients within an hour of when it was picked.

"It's all about getting peak nutrition to people who need it," Prokop said.

John Capecchi, who was on cleaning duty that night, agreed. "Maggie and Barb are big believers in giving it your all," he said. "We're not just going to throw this stuff in a bag. We're going to make it look good."

For some people, the garden has become a group activity. Scout troops ask if they can come work for an afternoon. (You don't have to belong to the parish to volunteer.) A pre-school class planted the potatoes in the spring, and every time he comes, Jim Jacobs brings along several members of his family. On this evening, he was joined by one of his daughters, Jean Glaraton, and her four children.

"We ended up with the whole family here," said Glaraton, who added that the weeding and watering comes with a moral. "It's a very good way to give kids perspective, because they can lose it in hurry. We had an argument at the dinner table tonight about salad dressing. The kids need to realize that not having the right salad dressing is not a catastrophe when there are people who don't have enough to eat."

A variety of motivations

The connection between faith and food goes back to the early 1990s, when a handful of churches around the country -- Guardian Angels among them -- first broke ground on their gardens. But involvement has skyrocketed the last couple of years, enough to prompt the folks at Minneapolis-based Institute for Agriculture and Trade Policy to look into the matter. In a study produced earlier this year, the agency dug up -- metaphorically speaking -- an array of various denominations and church sizes all over the country that have gotten involved.

"Interest in locally grown food is on the rise in every level of society," said JoAnne Berkenkamp, director of the agency's local foods program. "Combine that with a sense of serving your community, and it's a natural dovetail for faith communities."

Churches are well-suited to the effort, she said. "Faith communities excel at mobilizing people and responding to community needs. They do it for a variety reasons. Some communities approach it as a part of creationism, taking care of the earth. Others see it as a social justice issue in terms of providing food for the poor. And some take a more personal approach, seeing it as being about their own health. . . ." Star Tribune